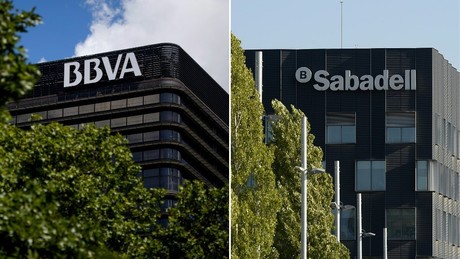 A wave of mergers is sweeping across the Spanish banking sector as lenders face up to a pandemic-induced recession, ultralow interest rates and growing competition from financial technology startups.

CaixaBank, Spain's third-largest bank, and Bankia, its fourth-largest, approved a merger in September which will create the nation's biggest domestic lender with around 664 billion euros ($788 billion) in assets in the country.

And BBVA, the country's second-largest bank, announced Monday it was in talks with Banco Sabadell, Spain's fifth-largest bank, over a possible tie-up.

If successful, it would create Spain's second-largest domestic bank, far ahead of Santander, which would still remain the country's biggest bank by total assets due to its huge international presence.

The trend is not new in Spain, which saw dozens of lenders disappear in a wave of tie-ups that followed the 2008 financial crisis, when Madrid received a European Union bailout of 41.3 billion euros for its ailing banking sector.

These new operations are "defensive to avoid problems in the future," Xavier Vives, of the IESE Business School in Barcelona, told AFP.

But unlike during the previous crisis, when lenders faced a solvency problem, this time around the issue is a lack of profitability, he added.

"Interest rates are low, the yield curve is very flat, and with the Covid pandemic, revisions of interest rates have been postponed. Under these circumstances, the banking business is not very profitable," said Vives.

At the same time, banks are facing fierce competition from financial technology startups, or the so-called "fintech" sector, which operate online and have much lower operating costs than traditional banks.

"Certainly, with negative interest rates it is very difficult to earn money," said Ricardo Zion, a bank expert with the EAE Business School.

"But the big problem for banks is that it is impossible to be profitable with a model based on having branches, especially to compete with the 'fintech' and new operators."

At a time when banks are boosting their provisions to face an expected rise on bad loans due to the economic fallout of the pandemic, these merger operations "strengthen their solvency," Zion said.

"Unlike during the last crisis, when banks were a problem, now they must be part of the solution," he added.

This banking consolidation, which will lead to the closure of branches and job cuts, has raised alarm bells at unions.

"I am worried about the magnitude of job losses which can occur," Pepe Alvarez, leader of the UGT union, Spain's second-largest, said during an interview with Spanish public radio.

"Financial institutions must be aware of the effort made by this country to keep them afloat during the last crisis and they can't return the favor with more dismissals," he added.

Fresh job cuts have already been announced. Santander plans to cut 4,000 jobs and Sabadell another 1,800, while the merger between CaixaBank and Bankia will reportedly cause the loss of 8,000 jobs.

Consumer groups fear the growing concentration in the sector will lead to an oligopoly that will hurt customers, with just a dozen banks left in the country when a decade ago there were over 70.

But Vives said this should not be a problem "if there are three or four big banks and sufficient competition from the new digital actors."