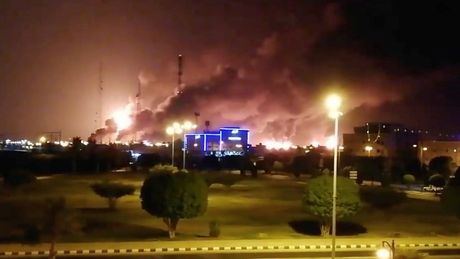 Saudi Aramco said Tuesday that a strike by Yemen's Huthi rebels on its plant in Jeddah tore a hole in an oil tank, triggering an explosion and fire that was however quickly extinguished.

The Iran-backed Huthis said they had fired a Quds-2 missile Monday in retaliation for Saudi Arabia's role at the head of a military coalition that supports the government in Yemen's long conflict.

Aramco took reporters Tuesday to the distribution facility where damage to the storage tank was visible, with the top rim fire-blackened and a railings above buckled from the heat.

"Unfortunately the facility was hit yesterday by a projectile, by a hostile attack. As you know Aramco has been a target of such hostile attacks," said Abdullah al-Ghamdi, manager of the North Jeddah Bulk Plant.

The roof of the tank suffered "major damage" with a hole measuring two metres (six feet) across, he said. "It was a big fire, it was a big explosion but it was controlled."

The manager said that distribution from the plant, which provides refined products including jet fuel to the country's west, was restored within three hours even though the damaged tank -- one of 13 -- remained out of action.

"The fire was extinguished in a very short time, it only took about 40 minutes to put out a major fire in a major tank like this," he said, confirming there had been no casualties.

Yemen has been locked in conflict since the rebels took control of the capital Sanaa in 2014 and went on to seize much of the north. A Saudi-led military coalition intervened to support the internationally recognised government in 2015.

Tens of thousands of people, mostly civilians, have been killed and millions displaced in what the United Nations has called the world's worst humanitarian disaster.

Britain's Middle East Minister James Cleverly condemned the latest strike, saying it threatened to derail efforts to end the war which has devastated a country that was already the poorest on the Arabian Peninsula.

"The only way to end Yemen's dire humanitarian crisis is for the parties to cease their hostilities and get round the negotiating table," he said in a tweet.

Saudi Arabia has been targeted with dozens of ballistic missile and drone attacks since the start of last year, including a devastating and unprecedented strike on Aramco's facilities in the country's east.

Washington and Riyadh held Iran responsible for that attack.

"What happened yesterday was another hostile attack, similar to what happened at Khurais and Abqaiq," he said.

"However, this will only demonstrate that Aramco's resilience to such hostile attack will remain, and demonstrate the reliability of our energy supply" within and outside the kingdom, he added.

Huthi aerial assaults have mostly targeted southern provinces along their shared border. Jeddah however lies some 600 kilometres (370 miles) from the frontier.

The latest attack occurred as the United States deliberates tagging the rebels a "terrorist organisation", a move that has drawn concern from humanitarian agencies who say it could cripple aid delivery and tip the country into famine.

The Huthis have reacted angrily to the prospect, saying President Donald Trump had no right to make the ruling after failing to win a second term.

However, his national security advisor Robert O'Brien said during a visit to Manila on Monday that the US was "keeping all our options open".

"Right now we encourage the Huthis to expel the Iranians, to stop attacking neighbours and stop attacking people within Yemen and engage in a good-faith peace process with the other stakeholders in Yemen," he said.

Yemeni Information Minister Moammar al-Eryani said the targeting of Aramco was a "full-fledged war crime" that affected not only Saudi Arabia but energy security and the global economy as well.

The strike underlined the need for the Huthis to be designated as a terrorist organisation and for action from the global community to halt Iran's interference, he said in a tweet.