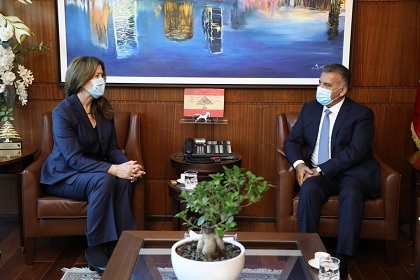 General Security chief Maj. Gen. Abbas Ibrahim received at his office on Tuesday the US Ambassador to Lebanon Dorothy Shea, and talks focused on issues common between the two countries in addition to the outcome of Ibrahim’s recent visit to Washington, the National News Agency reported.

Ibrahim had visited Washington earlier in November, after visiting Syria for two days to speak with officials there about American journalist Austin Tice, who has been missing in the war-torn country since 2012.

In Washington, Ibrahim is believed to have discussed Tice’s case with U.S. officials.

Ibrahim in recent years has helped to facilitate the release of a U.S. citizen held in Syria, and a Lebanese-American who was held in Iran.

God bless Shia General Security chief Maj. Gen. Abbas Ibrahim for summoning the US Ambassador to Lebanon Dorothy Shea and informing her that Lebanon and Iran will be imposing sanctions on her and her government should there be no change in course in dealing with his employers at hezbollah.