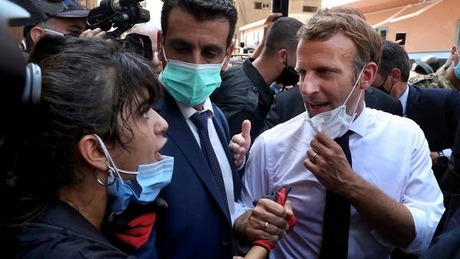 France had announced Thursday that it will host a video conference with international partners on December 2 to discuss humanitarian aid for crisis-stricken Lebanon.

The conference will be held in conjunction with the United Nations. It aims to attract the highest-level representation possible, with the aim of encouraging aid to the debt-strapped Lebanese economy, media reports said.

After the colossal Beirut port blast which destroyed large parts of the capital, French President Emmanuel Macron pledged to press ahead with efforts to prevent the collapse of Lebanon. The explosion had further complicated the financial and political crisis in the country.

However, the French initiative aimed at stabilizing Lebanon and providing an opportunity to unlock billions of dollars in international aid to reform the economy has not yet come into fruition.

According to sources, France decided to proceed with the humanitarian conference due to the worsening economic situation and the Covid-19 pandemic.

“There isn’t a huge desire to help Lebanon from the international community, but aid should be delivered directly to the people,” a source aware of the conference said.

Earlier, international firm Alvarez and Marsal announced it had withdrawn from forensic audit into the central bank’s accounts as it had not received the necessary documents to carry out ist task.

The firm’s decision, announced earlier on November 20 by caretaker Finance Minister Ghazi Wazni, was a blow for Lebanon as the audit is a crucial demand by the International Monetary Fund, France and others creditors demanding it as part of urgent reforms to unlock desperately needed financial support.

Hopefully, Iran will be at the forefront of this Aid Conference and provide Lebanon and its people with much needed aid.

As long as not a single cent is donated in cash, there is a good chance that at least 50% of the materials will reach their intended destination.
Cash received would only be distributed to fill the pockets of the politicians and give Hizballah more money to buy even more arms.