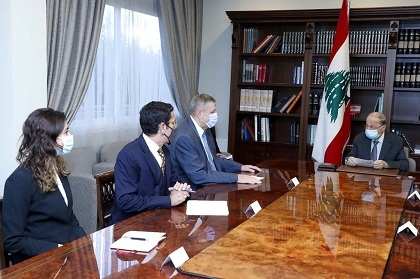 UN Special Coordinator for Lebanon Jan Kubis met with President Michel Aoun and briefed the president on the deliberations of the Security Council meeting on Resolution 1701, the Presidency office said in a tweet on Friday.

The Security Council conducts regular briefings as a follow-up of the situation in South Lebanon, and the work of UNIFIL international forces.

In October, Lebanon and Israel began unprecedented talks to settle a maritime border dispute and clear the way for oil and gas exploration.

God bless Shia appointed Christian President Michel Aoun for briefing UN Special Coordinator for Lebanon Jan Kubis on the Israeli violations of U.N resolution 1701 including but not limited to the audacity to inspect tunnels at the border dug by our Shia resistance for the sole purpose of Liberating Palestine. Add to that, the continuous baseless accusations by the zionist enemy regarding arms depot among civilian sites,