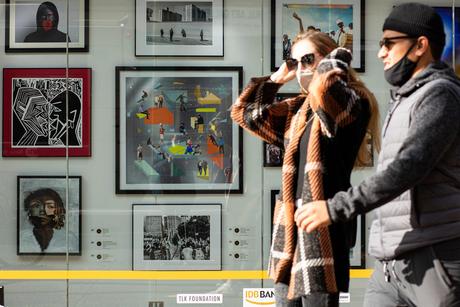 Thousands of shops and restaurants have closed this year as the virus ravages the Big Apple's economy, and artists are now getting some of them as studios and exhibition space.

"Sometimes they say tragedy brings an opportunity. So this is an opportunity," says the artist known as Sir Shadow, performing his signature one-stroke drawings in a former furniture store in Manhattan.

The 70-something is helped by Chashama, a 25-year-old New York non-profit that persuades property owners to temporarily donate unused units to struggling artists to use as studios and to display their work.

With landlords struggling to fill vacated lots, Chashama is upping its efforts amid the pandemic and plans to add 100 spaces within the next year to the 150 studios it already operates.

"There are definitely a lot more spaces available and a lot more that people are willing to give us at the moment," founder and artistic director Anita Durst told AFP.

Artists receive the space for free and take home all money made from any sales, a godsend in New York where retail space is prohibitively expensive and galleries customarily take a cut.

The arrangement -- which sees artists move out again after the unit has been leased -- also works well for the property owners.

"We make the space look nice. We're there to open the doors for the brokers. So, in that way, we try to help lease it," said Durst.

A similar initiative is happening in the Upper West Side area of Manhattan where vacant storefronts on the prominent Columbus Avenue thoroughfare are prominently displaying the works of local artists.

Oil on canvas paintings, acrylic paint artworks and photographs appear in windows alongside signs that read "Retail Space Available" in the Art on the Ave NYC exhibition, which runs from November 21 to January 31.

The idea was conceived in June by three teachers, including local resident Barbara Anderson who became increasingly depressed by seeing one shop after another close or board up as the virus engulfed New York.

"I said, 'There's got to be something better we can do, something a little bit more energetic or vibrant,'" she explained to AFP during a tour of the exhibition.

"Hopefully, it brings foot traffic to the area and also helps businesses that are struggling to make rent payments," Anderson added of the exhibition which features approximately 40 artists.

Forty-five-year-old Lance Johnson is one of them.

His brightly colored mixed media artwork entitled "We the People," priced at $3,500, gleams at passersby who stop to take photos and press their noses to the glass to read the accompanying caption.

"Instead of brown paper lining the windows you see amazing art. It changes your mood," says Johnson.

"You also see the diversity that is New York City. That's a beautiful thing, especially now that people are saying New York is dead.

"It's not true. We're still here, we're still fighting and it's important to share that," he adds.

Back at Chashama, Sir Shadow -- who would risk the wrath of police by hanging his drawings from park fences and washing lines before teaming up with the program in the mid-90s -- thinks the pandemic will bring lasting exposure for artists.

"Once people get used to seeing these spaces full and they feel the benefit and see the beauty of it, it can't go back to the old way," he says.