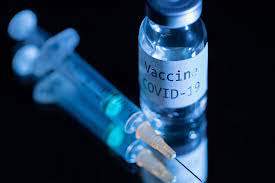 Early 2021 will see a first vaccination drive targeted at the most fragile and exposed groups, followed by a second campaign for the rest of the population, Macron told a press briefing at the Elysée Palace in Paris.

Prime Minister Jean Castex, addressing parliament, added that people in retirement homes and some staff working there would get priority for vaccinations.

Worldwide hopes that Covid shots could be ready for use by the end of this year received a boost when U.S. firm Moderna said it was filing Monday for emergency authorisation of its Covid-19 vaccine in the United States and Europe.

Another vaccine developed by Pfizer and BioNTech has also been submitted for approval on both sides of the Atlantic in recent days, with both inoculations claiming around 95 percent effectiveness.

Pfizer/BioNTech predicted their vaccine could be greenlit in the US shortly after December 10, while Europe's medicines regulator said earlier Tuesday that it would decide by December 29 whether to them grant emergency approval, ahead of Moderna's treatment.