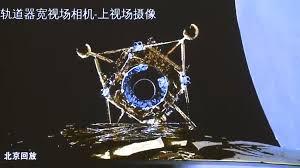 An unmanned Chinese spacecraft landed on the moon Tuesday, state media reported, marking only the second time the country had successfully placed a probe on the lunar surface.

The Chang'e-5 spacecraft "landed on the near side of the moon late Tuesday," the Xinhua report said, citing the China National Space Administration.