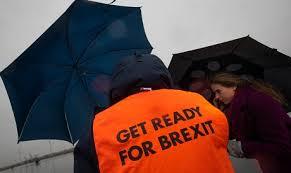 EU and UK trade talks inched onwards under renewed pressure Monday as transport chaos triggered by the emergence of a more contagious variant of the coronavirus in Britain overshadowed efforts to reach a Brexit deal.

Only 10 days are left until January 1 when Britain will leave the EU single market and customs union and hopes of securing a new arrangement suffered a blow as another deadline passed.

EU and British negotiators remained in Brussels, with talks still blocked over the right of European crew to continue fishing in Britain's rich waters, as well as concerns over fair trade rules.

Without a deal, Britain's links to the European Union end at midnight on December 31 (11:00 pm UK time) with a new tariff barrier that will sharpen the big shock of unravelling a half-century of EU membership.

A Sunday deadline set by the European Parliament, which could refuse to approve the agreement, expired without an agreement being found, leaving no time for MEPs to ratify an eventual deal before January 1.

"Political games from Westminster have wasted too much time," said German MEP Manfred Weber, who leads the conservative group in parliament, warning that members would take their time and not "rubber stamp" a text.

But Weber also said parliament "will remain constructive partners" and that "alternative procedures are possible" -- though what they were was not yet agreed.

As long as a deal is found in the next hours or days, European sources said this could involve a provisional implementation of a pact with MEPs having their say in January.

"Broadly speaking, the EU side is of the view that the only deadline that now matters is December 31," said Mujtaba Rahman of the Eurasia Group, a consultancy.

Whatever the case, the EU has finalized interim plans to manage road and air transport for six months and fishing for a year in the event of a no deal -- but these would also require an agreement from the UK to reciprocate.

"We remain very far from an accord," warned a European diplomat, who said that some on the EU-side were weighing whether it was time to walk away.

"Negotiating through exhaustion is not very healthy," the diplomat added.

The talks in Brussels continued as Britain was effectively cut off from the world, after Prime Minister Boris Johnson said a highly contagious mutation of the virus was spreading in the UK.

The emergency left holiday travelers stranded and blocked goods crossing the Channel, presaging the potential effects of a failure to secure a last-minute trade deal.

"It's a tragedy what's happening in Britain, and this Brexit is a tragedy, we see it more and more every day," France's EU commissioner Thierry Breton told BFM Business, when asked about the new outbreak.

If Britain "had chosen to remain in the European Union... today we could have helped them," Breton argued.

With just days before negotiators should head home for Christmas -- assuming the border reopens -- Johnson insisted that Britain's position had not budged.

Britain intends to assume control over its waters on January 1, but is ready to allow continued access to EU fishing fleets for a transitional period under new terms.

UK negotiator David Frost wants Britain to take back more than half the fish currently assigned under the EU quota system, under a three-year agreement.

The European side insists the UK accept getting back only a quarter of the fish quota -- and that the transition period should last six years.

Hubert Carre, head of France's top commercial fishing lobby, said this was already too much.

"We're wondering whether a no deal is better than a bad deal," he told BFM, accusing the British of being "very greedy."