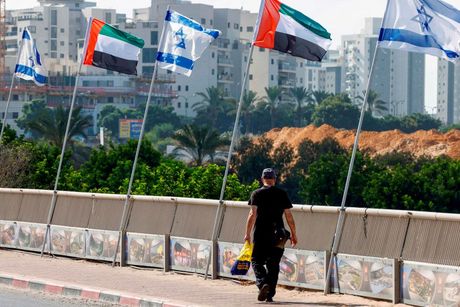 Jared Kushner, US President Donald Trump's son-in-law and advisor, visits Morocco on Tuesday on the first commercial flight from Israel to seal ties between the two countries.

Morocco is the fourth Arab state this year to announce their intention to normalise relations with Israel under US-brokered deals.

Previously, Egypt and Jordan had struck peace agreements with Israel decades ago.

Here is a recap of the Jewish state's rapprochement with the Arab world.

- 'Huge breakthrough' -In a surprise announcement on August 13, Trump says Israel and the United Arab Emirates have reached an agreement to normalise ties.

In a tweet he hails a "HUGE breakthrough" and a "Historic Peace Agreement between our two GREAT friends".

Israeli Prime Minister Benjamin Netanyahu says the agreement means "a new era began in the relations between Israel and the Arab world".

The UAE says that under the deal Israel agrees to "suspend" annexation of parts of the occupied West Bank, but Netanyahu says it has simply been put off.

Palestinian president Mahmud Abbas calls the deal a "betrayal" of their cause, including their claim to east Jerusalem as a capital of their future state.

- 'Stab in the back' -On September 11 Trump announces that Bahrain and Israel will also normalise ties.

Four days later the two Gulf states, which have never been in conflict with Israel, sign the accords at the White House.

The Palestinians condemn the agreements as a "stab in the back".

- Sudan too -On October 23 Sudan announces plans to also normalise ties with Israel as Trump agrees to take it off a US sanctions blacklist of state sponsors of terrorism.

Trump says that "at least five more" Arab countries want to normalise their relations with Israel.

- Secret Saudi visit -Reports on November 23 that Netanyahu made a secret visit to Saudi Arabia also spark a flurry of speculation that the two countries were about to normalise ties.

A peace deal with Riyadh, which has said it would stick to the decades-old Arab League position of not having ties with Israel until its conflict with the Palestinians is resolved, would be a massive diplomatic prize for the Jewish state.

Kushner travels to Morocco from Israel on the first direct commercial flight since they normalised ties.

And many more will sign on. Most Sunni states realise the advantages in co-operation in agriculture, technology, water, security etc.
Very soon, the Arab world will be split between the Sunnis having relations with Israel and through this advancing in the 21st Century and the Shias keeping to their hatred of Israel and remaining in the 19th.