Geagea to Nasrallah: Lebanon Collapsed Because of Your Resistance 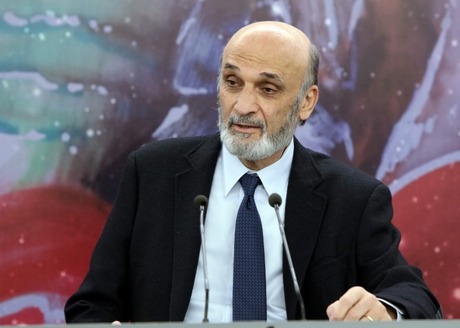 “Sayyed Hassan said his Resistance is protecting Lebanon and preserving its rights. By God, we do not want you to preserve or protect Lebanon. All that we want of you is not to encroach on Lebanon and the Lebanese people,” said Geagea.

He added that Lebanon’s “sovereignty is violated like never before, its people humiliated, its economy collapsed, its Arab and foreign friendships lost. The Lebanese passport has never been turned into a farce like it is today, all because of your (Hizbullah’s) Resistance.”

Geagea lashed out at Nasallah’s remarks that only the Resistance is capable of protecting Lebanon’s oil wealth.

“These resources are a natural gift from God, we know how to preserve them. The important thing is not to involve yourself in this matter,” stated Geagea.

“The majority of the Lebanese people believe well that the situation in Lebanon today is the result of Hizbullah’s practices,” the LF leader emphasized.

Rafiq Hariri with $25 billion rebuild downtown Beirut, fixed the airport and improved infrastructure all required to revive economy and attract investment + multinationals as they always preferred Beirut for their regional headquarter. Hizb since they assassinated Hariri, Tueni and many others since 2005 have cost Lebanon with Aoun complicity $40 billion in electricity, $15 billion in 2006 War, $40 billion in high interest on debt due to political instability, and over $200 billion by reducing the 6% growth prior to 2006 to Zero or negative growth, not to mention the exodus of all multinationals with their good paying jobs, Lebanon isolation, dried up investments, in addition to destroying our institutions and reputable education, banking and medical sectors. Hizb made funding ventures or long term investment in equipment or technology impossible. Hizb and Aoun are premeditated assassin of Lebanon, despite being the country with the highest potential in the region.

Finally, someone tells him the truth. I bet it hurts.

He seems to be the ONLY one who is not afraid of Ebola...

Ya geagea!! From your mouth to the door of the sky!!!

indeed this organisation is the major factor in the destruction of Lebanon, however both of them are warlords, one is stil active, the other one in retirement nowadays wearing a suit , we should not forget 75-90 civil war, and the murder of Dany Chamoun plus wife and children.

Kazan.
100%
what geagea says rings true.
But I dont trust him.

who do you trust?

Yes, all facts of the past and at the same time Geagea was the ONLY "warlord" that admitted mistakes of the past and apologized for them.
Ideally, they should all go, realistically, no nation US, Europe or other will support that ideal simply because the devil the you know is better than the devil that you don't know.
The only fly in this ointment is Hizbullah et al and it appears it is being worked on urgently as we speak.
Don't know if the solution is going to be a violent one (hope not) or a settelment of sorts. The one thing for sure is that Hizbullah must be at least rained in.

he had to choose between the bad and worst.
that was the 2 options available.

Everyone knows that the murderous hezb are Iranian stooges who don’t care about Lebanon or about non shia Lebanese. Their only allegiance is to the corrupt disgusting Khameini.

The truth has always been there, the taif agreement stipulated the withdrawal of the Israeli forces and a two stage withdrawal of the Syrian forces within a set timeline. Israel honoured its commitment and withdrew, HA. knew this and capitalised on the situation and claimed liberation just like their imaginary victory in 2006. but the Syrians didn’t. It took the yearly meeting of Maronite bishops to demand the implementation of the withdrawal of Syrian forces, which cost the life of Rafik Hariri because he endorsed this position.