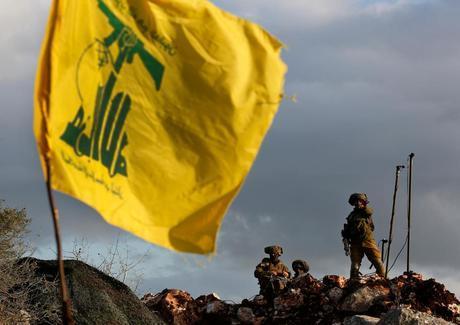 Hizbullah on Saturday denounced the US sanctions imposed on the leader of Iraqi paramilitary Popular Mobilization Forces Faleh Fayyadh.

In a statement issued by the party, it said Hizbullah “condemns and denounces this American move against Faleh Fayyad and what he represents. We consider it a badge of honor on his chest to be added to his rich jihadist history in confronting terrorism and atonement.”

On Friday, the US Treasury said Faleh Fayyadh, head of the state-sponsored network of pro-Iran fighters, was responsible for brutal attacks on protesters in October 2019.

The Treasury said Fayyadh was connected to “serious human rights abuse,”and slapped sanctions against him.

“By directing and supervising the murder of peaceful Iraqi demonstrators, Iran-aligned militants and politicians such as Faleh Fayyadh have been waging a violent campaign against Iraqi democracy and civil society,” said Treasury Secretary Steven Mnuchin.

The PMF -- Hashed al-Shaabi in Arabic -- has close ties to Tehran but is overseen by the Iraqi government, with Fayyadh its chairman and top commander.

Hezbollah is an iranian shia terrorist organization that is using Lebanon to advance the agenda of its masters in Iran.

And here I was thinking all these years that Hizballah was a Lebanese terrorist organisation, so why is it sticking its nose into Iraqi affairs?

I am pleased to see the "resistance" discussing Iraq and getting upset over a person there being sanctioned.... I think HA should go to war for them and all go to Iraq to help defend them over there, and while your at it STAY THERE!

Typical of the Iranian terror group to voice such opinions