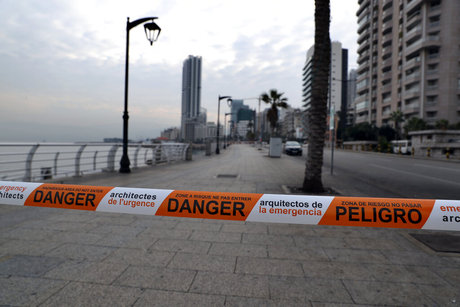 Lebanon, which began a 25-day lockdown Thursday to curb a huge surge in Covid-19 cases, is inclined to toughen the measures further in light of the dire health situation, TV networks said on Sunday.

“There is an inclination to toughen the anti-coronavirus measures and close the airport for a week,” al-Jadeed TV reported.

“There is an inclination to impose a curfew and close all public institutions and administrations except for some essential ministries,” it added.

It also said that the anti-coronavirus committee has recommended the closure of shops and supermarkets.

LBCI television for its part said that “the anti-coronavirus committee will submit recommendations to the ministerial committee demanding the closure of the Rafik Hariri International Airport, the borders and most sectors for seven days.”

The committee will also ask for ending lockdown exceptions and the Higher Defense Council will announce the date of the new measures, LBCI added.

Privately-owned al-Markazia news agency meanwhile reported that the caretaker cabinet is inclined to take a decision to shut down the country from Wednesday until February 1.

Earlier in the day, President Michel Aoun scheduled a Monday emergency meeting for the Higher Defense Council to discuss the health situation in the country and the circumstances of the medical sector.

Lebanon already began implementing a 25-day lockdown on Thursday in a bid to rein in the deteriorating situation. The current lockdown is the third since the first case was reported in Lebanon in late February. It has shut down most businesses and limited traffic by imposing an odd-and-even license plate rule on alternating days. It has also reduced the number of flights at the country's only international airport.

Lebanon on Saturday registered a new staggering tally of 5,414 coronavirus cases while 5,440 cases were recorded on Friday.

The high tallies come in the wake of the holiday season, in which tens of thousands of visitors flew into the country to celebrate Christmas and New Year's.

First responders in the country hit by a severe economic crisis say they have been transporting nearly 100 patients a day to hospitals that are now reporting near-full occupancy in beds and intensive care units.

Lebanon saw new infections start to increase during the summer, following a massive explosion in Beirut's port in August that shook the city and its heath sector, killing over 200 people and injuring 6,000. August's numbers increased by over 300% from July as a result and have since been climbing.

Lebanese government must IMMEDIATELY:
1. Impose a full general lockdown for 12 weeks. No leaving home unless for emergency, grocery/food purchase or 20 minutes of walking excersize. Must always wear masks outdoors, must social distance from others no less than 1.8mtrs minimum between any people.

2. Borders hard lockdown. All persons entering Leb must enter army controlled 15 day quaranteen period with 3 covid tests before being let out. 3 or 4 hotels need to be allocated specifically for quaranteen and all cleaners and transport workers must get daily covid tests. This includes international flight crews. At hospitals all doctors and workers must be tested daily. Any positive results will need quaranteen for 15 days from the day of positive result.

3. All covid tests must be totally free and masks should be issued free to everyone and everyone in Lebanon should do the test immediately. If possible there should be drive thru car tests. UK strain must be tested for in genome sequencing as part of each covid test because the UK strain is 70+% more contagious.

4. Contact tracing must be established by government. Further all people entering any shop or business must sign into a government controlled online database to keep track of peoples movements incase of outbreak.

5. Food and medicine vouchers should be given for all lebanese citizens free for 12 weeks to support them during lockdown because there will be no income. Enough to keep people alive.

8. For every day this plan is delayed it will mean 2 additional weeks of total lockdown!

Let's do this to eliminate corona before corona eliminates lebanon. All these must be done in order for it to work no shortcuts.

Maybe they should start by ENFORCING the current lockdown---there was heavy traffic yesterday in our area at 8 PM. Now that wouldn't be unusual from Monday through Saturday, but yesterday was a day when NO CARS are supposed to be on the road. The odd/even plate thing is a joke--you cannot tell which cars are supposed to be on the road by just be looking at the plates of the cars on the road. Maybe raise the fine to 500000LL from 50000LL too--$6 is not a big fine in any country.

Also, the odd/even thing should apply to service/taxis too---why do they get to use the roads all the time when they contribute nothing towards them in the first place except for additional traffic and congestion.