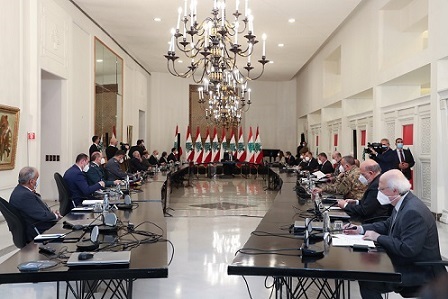 The Higher Defense Council on Monday declared a general state of emergency that begins on Thursday and ends on January 25.

A daytime and nighttime curfew will be enforced from 5am Thursday until 5 am January 25 and all public and private cars will be banned from the streets, the Council said in a statement.

All citizens are to remain at home with few exceptions, including health professionals, journalists, those working in the food sector and other essential workers, the statement added.

All public and private institutions and commercial banks will meanwhile be closed while supermarkets and restaurants will be allowed to offer delivery services from 5am till 5pm.

The airport will meanwhile remain open but travelers arriving from Adis Ababa, Cairo, Adana, Istanbul and Baghdad will have to be quarantined for a week in hotels on their own expense.

They must take a PCR test upon landing in Lebanon and then again six days later.

Land and maritime borders will also be closed to all travelers except those carrying a valid transit visa and passenger traffic at the Beirut airport will be slashed to 20 percent of arrivals in January 2020.

The state of emergency can be extended in light of the results, media reports said.

The new measures came after officials and health professionals warned that hospitals were quickly running out of beds, leaving many scrambling for treatment, even though a lockdown has been in place since January 7.

But many officials, including the caretaker health minister and officials on a government committee, considered that lockdown to be too lenient because it exempted many sectors, such as florists, plant nurseries and factories.

Critics have said uncoordinated and hesitant policies wavering between relaxing restrictions and shutting down were behind the failure to contain the virus. For instance, despite a rise in infections, the government relaxed restrictions ahead of Christmas and New Year's celebrations, hoping to boost a crumbling local economy as thousands of Lebanese expats arrived in the country. Bars and nightclubs, which had been ordered shut for months, were allowed to open.

Over the past seven days, it has recorded a 70 percent increase in infections, placing it among the countries currently experiencing one of the world's steepest virus upticks, according to AFP data.

It trails behind Portugal, which has seen a 73 percent increase, Nigeria, with a 77 percent rise, and Ireland, with a 190 percent uptick.

Firas Abiad, the head of Lebanon's main coronavirus hospital, said the country recorded more than 30,000 new cases between January 3 and 10 , hitting a peak of 5,440 new infections on Friday.

Overwhelmed by the influx of new patients, hospitals have had to turn people away, sending many families into a desperate hunt for hospital beds.

One hospital at the weekend said it was treating patients in cars because it had reached capacity.

What about travelers from Tehran ?

We pay them and put them up in palaces as they are our most treasured guests!! Hasouni would not have it any other way! LOL

Overpaid and overweighed good for nothing lowlifes.