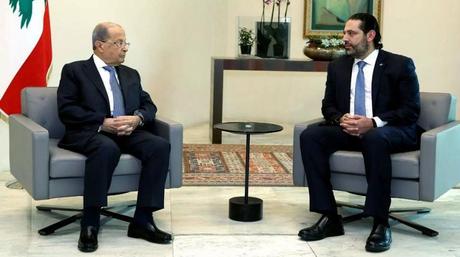 A leaked video of President Michel Aoun accusing PM-designate Saad Hariri of “lying” about a government format, might be “intentional” to push Hariri to step down from his task, al-Akhbar newspaper reported on Tuesday.

Sources related to the government formation file, told the daily on condition of anonymity that the leaked video would further delay the formation of the government growing more complexities.

They asked whether “these leaks were intentional to push the Prime Minister-designate to withdraw from his mission.”

On endeavors reportedly led by Hizbullah between Aoun and Hariri to bridge the gap in views and expedite the formation, the sources said “if true, it surely faces greater difficulties and obstacles,” after the video.

Aoun was caught on camera saying the PM-designate has “lied” about being given a cabinet line-up “paper” by the president.

Hariri replied by tweeting a bible verse about “cheating.”

Hariri was designated in October to form a much-needed government as the country grapples with an unprecedented economic crisis pushing the Lebanese into poverty.

On Sunday, MP Jebran Bassil, head of the Free Patriotic Movement and son-in-law of Aoun, lashed out at Hariri arguing that there is no trust in him to reform the country.

it's hard to be optimist about Lebanon's future, it's so clear that all the politicians don't trust each other . I believe it is impossible in this case to form a team that works with honesty for the same goals. it's all waste of time.

Yes, and they’re the official FPM/tayyar reps in Ontario. Moreover, they’re related to the infamous magistrate lady in Lebanon.