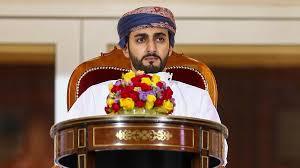 The oldest son of Oman's sultan became the first crown prince in the country's history Tuesday as the Gulf state published a new "fundamental law" stipulating the line of succession.

Sultan Haitham bin Tariq had issued a decree Monday setting a "specific and stable mechanism" for succession, providing for the appointment of a crown prince for the first time.

Official media did not mention the name of the crown prince, but Sultan Haitham's oldest son is Dhi Yazan Bin Haitham, currently minister for culture, sports and the youth.

Sultan Haitham took the throne last January after the death of his cousin Sultan Qaboos, modern Oman's founding father -- who had neither a brother nor a child to succeed him.

Sultan Haitham has maintained his cousin's neutral stance in foreign affairs but has made various domestic changes.

Under Oman's constitution, the sultan should be a member of the royal family, as well as "Muslim, mature, rational and the legitimate son of Omani Muslim parents."