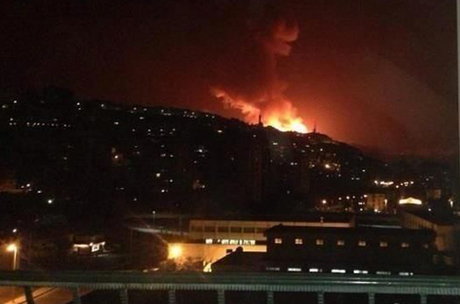 New Israeli air strikes on Syria have killed at least 57 people, the latest in hundreds of attacks on its strife-torn neighbor since its civil war began nine years ago.

The raids and missile strikes have targeted regime forces and their depots as well as fighters from President Bashar al-Assad's Iranian backers and his allies in Lebanese Hizbullah.

Israeli Prime Minister Benjamin Netanyahu has vowed not to let Iran entrench itself in Syria.

Here is a recap of some of the major reported raids, which Israel does not always confirm.

In January 2013 Israeli planes hit a military complex near Damascus suspected of holding chemical agents, according to a U.S. official.

Israel later implicitly confirms the strike for the first time since the start of the Syrian war in 2011.

In May 2013 Israel strikes the Jamraya scientific research center near Damascus, a weapons depot and an aircraft unit.

The Syrian Observatory for Human Rights, a Britain-based war monitor which relies on a network of sources inside the country, says 42 soldiers are killed.

In January 2015 a raid on the Syrian side of the Golan Heights kills six Hizbullah personnel and a general from Iran's Islamic Revolutionary Guard Corps.

Hizbullah commander Samir Kantar, who spent almost 30 years in Israeli prisons, dies in a raid blamed on Israel near Damascus in December 2015.

In March 2017 Israel says it has targeted "sophisticated" weapons destined for Hizbullah near the central town of Palmyra.

In December 2017 Israeli planes again target the Jamraya research center along with a weapons depot, according to the Observatory.

In February 2018 Israeli raids hit Syrian and Iranian targets after an Israeli fighter jet is shot down.

In April Syria and its ally Russia accuse Israel of a dawn bombing raid on a Syrian airbase that kills 14, including seven Iranians.

Later that month, at least 26 mostly Iranian fighters are killed in a raid Syria says bore the hallmarks of an Israeli operation.

In May 2018 an attack near Damascus, blamed on Israel, kills 15 pro-regime foreign fighters including eight Iranians.

Israel carries out dozens more raids that month on what it says are Iranian targets, as Iranian rocket fire hits the occupied Golan Heights.

At least 27 pro-regime fighters are killed, including 11 Iranians, the Observatory says.

Two months later Syrian air defenses responding to an alleged Israeli strike accidentally down a Russian transport aircraft with a crew of 15, sparking tensions between Israel and Moscow.

At the end of 2018 Israel again bombs weapons depots near Damascus.

On January 12, 2019 Syrian air defenses shoot down Israeli missiles targeting a warehouse at Damascus airport, with Netanyahu saying Israel is "more determined than ever to act against Iran in Syria."

In response, Israeli jets carry out further strikes inside Syria, with at least 11 fighters killed.

In the deadliest strikes since the start of the raids, Israel kills 57 regime forces and allied fighters in raids on eastern Syria overnight Tuesday.

As the line in the song goes "When will they ever learn?". Presumably neither the Iranians or the Syrians will.

yes, seeing the ruins after the fires.