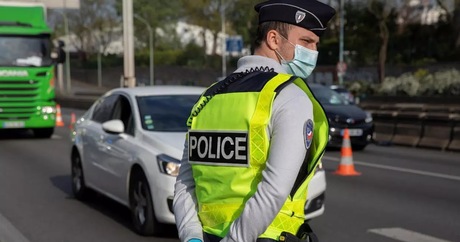 The French government is expected Thursday to announce new restrictions to stave off a rise in coronavirus cases but unlike some of its neighbours a full lockdown appears off the agenda for now.

Among the measures floated to try to avert a much-feared third wave of infections include expanding a 6:00 pm curfew in place in parts of the east to the whole country.

Most of France is still subject to an 8:00 pm curfew imposed in mid-December when a second national lockdown was lifted.

Bringing it forward by two hours would stall the "apero effect", said the leader of President Emmanuel Macron's Republic on the Move party, Stanislas Guerini, referring to the French tradition of meeting up for a pre-dinner aperitif.

France on Wednesday recorded around 23,000 new cases of Covid-19, around half the number detected in Britain on the same day but still far above the 5,000 figure the government had been aiming for by mid-December.

Speculation had been swirling that the government was preparing to follow the example of Austria, Britain, Israel and Portugal among other countries in imposing a third nationwide lockdown.

But several government sources told AFP there were no such plans, despite concerns about the spread of a new British variant of the virus believed to be highly contagious.

The president of the scientific council set up to advise the government on the pandemic, Jean-Francois Delfraissy, said France was "in a sort of race" to get the most vulnerable citizens vaccinated before the new variant made further inroads.

After an excruciatingly slow start to the vaccination drive in late December, for which Macron's government drew widespread condemnation, the pace of inoculations has picked up.

So far 247,000 people have received the first jab, a number set to rise sharply in the coming days as the vaccines are rolled out to all people aged over 75 starting on Monday.

Until now, the campaign was focused on people in care homes as well as healthworkers, firefighter and domestic workers aged over 50.

The government had rejected accusations of being a vaccine laggard and blamed high levels of resistance to the jabs in France.

Speaking during a visit to a vaccination centre in the northeastern city of Metz on Thursday, Prime Minister Jean Castex noted with satisfaction that vaccine scepticism was starting to decline.

He predicted a "stampede" for the injections among over-75s.

"Things are falling into place but people will have to be patient," he said.