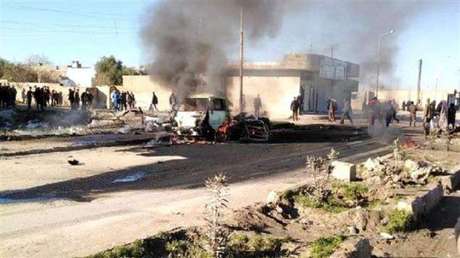 The roadside bomb went off as a car drove by in the region of Tebessa, the ministry said in a statement.

"Five citizens died and three others were wounded when a homemade bomb exploded as their car drove in Oueid Khenig-Roum, near the district of Telidjane in Tebessa prefecture," it said.

It gave no other details on the attack itself.

The same statement did note that a jihadist was killed by troops in the neighboring region of Khenchela, but it was not immediately clear if the two incidents were related.

"Following an ambush in Oued Boudekhane... in Khenchela prefecture, a detachment of the People's National Armed Forces shot dead... a dangerous terrorist," the statement said.

A machine gun, ammunition, and cell phones as well as a radio transmitter were recovered during the operation, the defense ministry said, adding that the operation was still ongoing.

President Abdelmadjid Tebboune denounced the attack in Tebessa as a "cowardly and barbaric act."

Tebboune, who has returned to Germany for treatment of post-Covid-19 complications, also sent his condolences to the families of the five Algerians killed.

General Said Chengriha, the army's chief of staff, meanwhile urged Algerians to be "vigilant" and to avoid going to regions considered unsafe.

Algerian authorities use the term "terrorist" to describe armed Islamists who have been active in the country since the early 1990s.

Between 1992 and 2002, a civil war pitting the army against multiple Islamist and jihadist groups left an estimated 200,000 people dead.

A 2005 Charter for Peace and Reconciliation was supposed to have turned the page on the conflict, but jihadist groups continue to carry out sporadic operations.

Since December 1, nine jihadists and four soldiers have been killed in clashes and several "terrorists" arrested, according to the defense ministry.

Official media also said late last year that the army had foiled a planned redeployment by Al-Qaida in the Islamic Maghreb (AQIM), following the death of their leader.

AQIM's leader Abdelmalek Droukdel was killed in June by French forces in northern Mali, but was replaced in November by Abu Obaida Yusuf al-Annabi, a well-known AQIM veteran and Algerian national.

Over the course of last year, 21 Islamist militants were killed, nine were captured and seven surrendered during Algerian army operations, the military said in a tally published earlier this month.