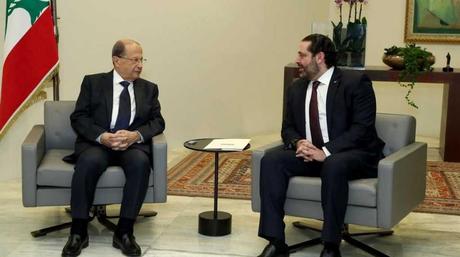 After the leaked “video crisis” between President Michel Aoun and PM-designate Saad Hariri, “prominent” politicians sought France’s intervention to mitigate the lingering tension between the two men, in a bid to ease the government formation deadlock, al-Joumhouria daily reported on Saturday.

“Well-informed sources” who spoke on condition of anonymity to the daily about the “endeavor,” did not specify the sides contacted in Paris.

But they noted a “discouraging” reply on part of France, reflecting a desire not to intervene, according to the daily.

Moreover, the sources reportedly carried “great dissatisfaction with the performance of Lebanese officials and their departure from the French initiative, hence bringing Lebanon to a very difficult stalemate.”

Tension escalated further last week between Aoun and Hariri against the backdrop of a leaked video that showed Aoun caught on camera accusing Hariri of “lying,” about the government formation.

Since the designation of Hariri to form a government in October, efforts have failed to yield results despite promises of an imminent cabinet formation late last year.

In response to Aoun’s video attacks, Hariri tweeted a bible verse about "cheating".

Efforts to form a new government in Lebanon seem halted until Hariri returns back from a trip to the United Arab Emirates.