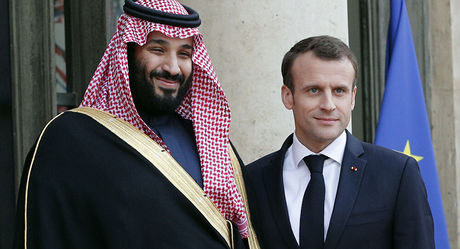 The daily said it obtained information from sources following up on the Lebanese file, that “Macron had contacted Salman on Saturday, wishing he provides help for Lebanon to prevent its collapse.”

But they added that the Saudi stance showed "no enthusiasm" in that regard, saying that “the Saudi position remains unchanged."

Saudi Arabia believes "the Lebanese should pick their choices better. Support can not be provided for those who choose to share governance with Hizbullah and Iran. Saudi Arabia will not help those who pursue an alliance with those who fight it and seek to destabilize it," the sources concluded.

I am sure Iran will step in and save Lebanon liked it saved Syria, Iraq, and Yemen.

I hope you are sarcastic!

And the dehumanisation of the Lebanese people continues.

It’s common sense, isn’t it? The ongoing impoverishment is the result if Iran’s meddling in the Near East. They have no business here. Arabs, however, contributed many times to rebuilding the country; and how did we repay their kindness? By forming governments with hizbala.

On the other hand, Iran will go on TV and state Lebanon rockets of hizbollah will free Palestine. That's on the cost of destroying the remainder of Beirut from the Amonium blast was used to free Syria too.

If the richest arab country won't help Lebanon in even basic humanitarian aid like beds and medicine and field hospitals etc then it is as bad as the devil himself.

What worse are you waiting for... Physical bombs?

Confiscate all saudi invested land in lebanon and place it under administration.

They can pay a significant tax to hold lebanese land titles and if they don't they can get stuffed.

Any iranians and iranian proxy's can pay tax too!

Typical Lebanese mentality of " I am entitled"

The rest of us work and pay taxes (to berri) who distributes the money to shias to re-vote dor him.

Shias think all is their right.

Confiscate their lands? Stupidest idea ever.

It is saudis' prerogative to use their money where they want. WTF!!

It is our fault that we are bankrupt( or more precisely the fault of our homegrown shias who keep voting amal and hezbollah time after time.)

Amal and hezb would bankrupt even germany if they were leaders there!!

Why is it stupid? Yes they are free to invest in a volitioe market but just like the stock market if you invest in a dangerous stock your risk is higher that you'll lose it all...

The want to be mean and not help, well why not tax them extra.

Not for the sale of being mean but because they are taking advantage of us.

It's not an entitlement we have . We fought for this land and country and if others wanna live here they should pay tax.

The fact that Lebanon still has relations with any of those Gulf countries is Insane!! They should be regarded at least as adversaries if not outright Enemies. Lets stop trading with them, traveling to their countries or accepting their cotizens in Lebanon.

Are the French idiots or what? if they couldn't "SAVE" Lebanon, they think Saudis will?

Macron, why don't your country and you weak socialist European friends the EU get tough with the one entity that has caused massive damage to whatever is left of Lebanon rather than ask the Saudis to do it.

He is a wise man,he know what's going on in lebanon, look at these districted countries where they are going, they are going to moderate the country, and look the lebanon people we are in 2021 we dont have bread in shos ... shame

We have brought this to ourselves. Our absolute disrespect for religions, and the divisions that we have created among us has created a toxic life situation that was spilling over and infecting the Lebanese people for very long years. Why should the KSA, France or any other country be obliged to help Lebanon. We must change our ways and to avoid future toxicity, we must first overcome challenges then drastically change our behavior for the better. The Lebanese people must stand together at all cost and in a united way, without discrimination. This will happen if you start with yourself and lead by example. I think the most important message that I have, is to remember that you make a difference! You as a Lebanese individual make a difference... What you do each day actually is affecting what's going on in Lebanon each day. So your life matters, you matter and use your life wisely. For the sake of Lebanon and the future of our children.

I love it!! I agree with them. To hell with Saudi Arabia

Thanks for your concern Macron. Why don't you ask Satan to "save" us while you're at it? No thanks. Macron stay home next time. We already have useless politicians in our country, we don't need useless French ones like yourself.

Macron understood nothing!
There is not ONE country in the world who will help us, as long as we help Ebola.

I hope Libsnees should take the right decision and let Iran and HizbAllah out of Lebanon.Hizballah is a state in another state with it's own army. This is not acceptable.wherevr Iran found the destruction found.