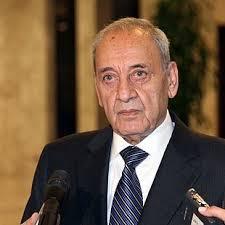 Speaker Nabih Berri on Monday said Lebanon is enduring an “undeclared blockade” as a result of its commitment to its principles, stressing that the country will never relinquish its oil and gas rights.

“Lebanon is under an undeclared blockade as the result of its commitment to its principles, resistance and sovereign rights,” said Berri in online remarks at the opening session of the International Conference on Supporting the Palestinian Intifada hosted by Iran.

“Allow me in this urgency to renew from Lebanon, which is suffering at present from the most serious political, economic, financial, living and health crisis in its history, and an undeclared blockade,” to pressure it into “abandoning its commitments towards the Palestinian cause,” said Berri.

The Speaker stressed that Lebanon will not relinquish its rights in its oil and gas wealth, despite the pressures.

You mean YOU don't want to relinquish the Speakership seat and your hold on any deal that comes through without it passing through your desk/pocket first right? Just wanted to make sure.

Well, first of all, for context

online remarks at the opening session of the International Conference on Supporting the Palestinian Intifada hosted by Iran.

And seriously, how many palestinians did Amal kill during the civil war, or does he not bring this up at this forum..

"undeclared blockade"? By whom?
Surely, once again he is interfering in matters which have nothing to do with his position as speaker of Parliament. If anyone had anything to say about this it should have been the Minister of Foreign Affairs, or maybe the Minister of Defence, but definitely not him.