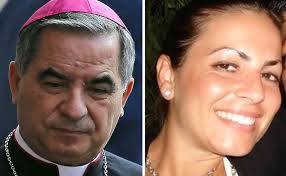 An Italian woman who worked as a consultant for disgraced Cardinal Angelo Becciu, a former top Vatican official, is facing an "imminent" trial for embezzlement, prosecutors said Monday.

Cecilia Marogna was paid around 500,000 euros ($604,000) for informal intelligence work for Becciu when he held the second-highest ranking position at the Secretariat of State, the most powerful department in the Vatican's bureaucracy.

In a statement, Vatican City prosecutors said Marogna would be tried for the crime of embezzlement committed with accomplices. There was no mention of Becciu.

Marogna was arrested in Milan in mid-October on an international arrest warrant from the Vatican, and held in custody for around two weeks pending extradition proceedings.

But on Monday, the Vatican said the arrest warrant had been dropped, allowing Marogna to appear in court as a free woman.

Marogna has insisted she was paid by the Vatican for her services as a mediator securing the release of kidnapped priests and nuns in Africa and Asia.

But some Italian media outlets cited evidence that she billed the Vatican for 200,000 euros spent on luxury products, including 12,000 euros for an armchair.

Like 72-year-old Becciu, Marogna is originally from Sardinia. While she has been dubbed the "cardinal's lady" by journalists, she has denied allegations of having had an affair with him.

Becciu was abruptly fired by Pope Francis in late September as head of the Vatican's saint-making department. He was also told to give up his cardinal's rights, denying him the chance to take part in future papal elections.

The cardinal later told journalists that Francis told him he was under investigation for embezzlement for syphoning off Vatican charity funds to help his siblings. He professed his innocence.

Following the scandal, the pope curtailed the financial autonomy of the Secretariat of State, which has also come under scrutiny over a controversial London property deal that was negotiated under Becciu's authority.

Management of the Secretariat of State's funds was handed to the Administration of the Patrimony of the Holy See (APSA), an institution sometimes described as the Vatican's central bank.