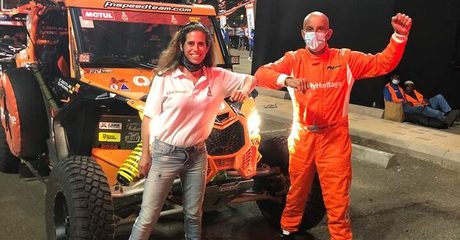 Israeli drivers participated in the latest Dakar Rally in Saudi Arabia, a country with which the Jewish state has no formal diplomatic ties but hopes to normalize relations, their manager said Monday.

The FN Speed Team took part in the 7,000-kilometer (4,350-mile) race in the Saudi desert with two drivers who hold both Belgian and Israeli nationalities, the team's manager Omer Pearl told AFP.

"We are proud to have made history by participating in this race," said Pearl, whose team finished second to last in the lightweight vehicles category.

He confirmed that certain members of the team, which is sponsored by the Israeli geneology firm MyHeritage, had entered the Gulf kingdom using Israeli passports.

"We waited for weeks... for the authorization to enter the country with our Israeli passports to participate in this rally and we are glad we did not give up," he added.

According to Israeli media, Israeli drivers also took part in the race with the American team CRV.

The 42nd edition of the famed rally, the most grueling event on motorsport's calendar, was held in Saudi Arabia for the second year in a row.

Regional heavyweight Saudi Arabia is often cited by analysts as another Arab nation that could follow suit.

Israeli Prime Minister Benjamin Netanyahu travelled to the Gulf kingdom in secret in November to meet with de facto ruler Crown Prince Mohammed bin Salman, according to Israeli media and Israeli officials who spoke to AFP.