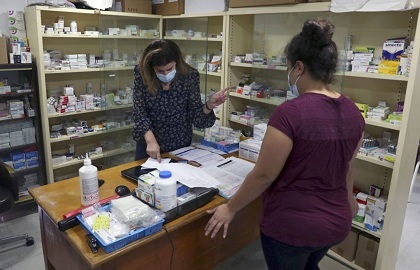 Lebanon is reeling under multiple crises including a deteriorating health sector and a shortage in medicines as a result of the exchange rate crisis, which also reflected on a shortage in infant milk formula strictly sold at pharmacies, Asharq el-Awsat reported on Tuesday.

Amid concerns of lifting subsidies from the import of basic goods, Lebanese rush to store medicine and baby milk in anticipation, which, if approved, will lead to a 6-fold increase in prices, said the daily.

Panic buying did not ease despite the assurances made by caretaker Health Minister Hamad Hassan and the ministerial health committee, that the government will only rationalize the prices of medicine and milk if it agreed on lifting subsidies.

The scarcity of medicines also affected the availability of infant baby milk, which is restricted for sale in pharmacies.

"There is a real availability crisis in infant formula which is now missing as a result of people storing it in large numbers, in addition to an approved rationing for its distribution, which is based on the consumption of each pharmacy in 2020,” Richard Khwairi, a pharmacy owner told Asharq el-Awsat.

“The missing milk is mainly for babies of one year old or older, because it is not subsidized. It is more likely that the milk is being stored to be sold later at higher prices when the health ministry approves a plan,” a pediatrician who refrained from being named said in remarks to the newspaper.

Ghassan al-Amin, head of the Order of Pharmacists of Lebanon, told the daily: “Today, medicine has become like a dollar for the Lebanese. The more they are able to store, the more they feel safe.”

He added that “the declaration made by the Governor of the central bank some time ago that he is heading to stop the subsidy was a major cause of the crisis that made citizens stockpile,” their essential goods.

Al-Amin said the pharmacies have been “placed in a confrontation with the people,” knowing they are “not to blame for the crisis. They are being subjected to daily harassment and insults, even with weapons.”

He said that the obligation by the Central Bank to secure funds in cash, has “added to the crisis and led to the closure of around 300 pharmacies, the number will likely increase in the coming months,” he said.

Infant baby milk, drugs for everything from diabetes and blood pressure to anti-depressants and fever pills used in COVID-19 treatment have disappeared from shelves around Lebanon.

Officials and pharmacists say the shortage was exacerbated by panic buying and hoarding after the Central Bank governor said in November that with foreign reserves running low, the government won't be able to keep up subsidies, including on drugs.

God bless Shia owned and appointed Strong Presidency, Government, Army, and Parliament for making available ballistic long range missiles to face the pandemic and the zionist enemy. The Lebanese people have shown they can do without baby milk, food, medicine and other vital essentials in order to conform the Saudi-American-Israeli-Sudani-Bahraini-Emirati coalition.