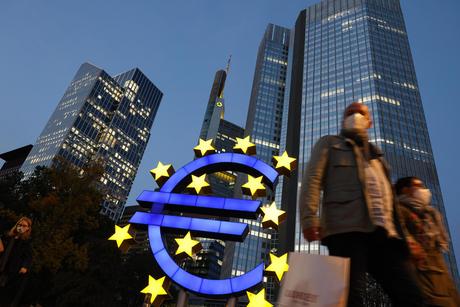 Eurozone banks further tightened conditions for approving loans in the fourth quarter of 2020, a European Central Bank survey showed Tuesday, as a resurgence of Covid-19 clouded the outlook.

Credit standards -- the yardstick that banks use to grant loans to companies and consumers -- became stricter in the last three months of the year as financial institutions cited the "deterioration of the general economic outlook, increased credit risk of borrowers" and a "lower risk tolerance", an ECB statement said.

In the first three months of 2021, banks expect credit standards to tighten even more, the central bank said, suggesting that they don't expect an imminent recovery from the latest wave of the coronavirus.

One in four of the 143 banks surveyed toughened their criteria to firms in the quarter, compared with one in five that had tightened criteria in the previous three-month period.

For loans to companies, the fourth quarter "saw the biggest tightening since the region's debt crisis, as banks' perceptions of risk rose", commented Jack Allen-Reynolds at Capital Economics.

Meanwhile criteria for loans to households for consumer purchases also tightened, but at a lighter pace than in the previous quarters of 2020, the central bank said.

Credit conditions tightened for firms and consumers in France, Spain and Germany, but remained stable in Italy, the ECB said.

Company demand for loans declined in the quarter meanwhile, continuing a drop that began after an all-time high in the second quarter -- during the first wave of the pandemic.

Demand for loans to firms is expected to increase in the next few months as companies seek financing to withstand the impact of the pandemic, while for households, banks expect it to fall.

The survey comes ahead of a key ECB meeting on Thursday, when the bank is expected to keep its monetary stimulus policy unchanged.

The ECB has already taken unprecedented action to counter effects of the pandemic, rolling out a 1.85 trillion euro ($2.2 trillion) emergency bond-buying programme to keep borrowing costs low and encourage lending.