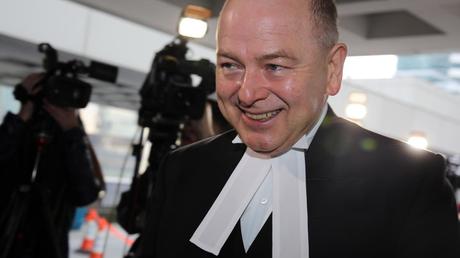 A top British barrister has pulled out of leading a team prosecuting a group of prominent Hong Kong dissidents, the city's authorities said Wednesday, following growing criticism in the UK.

But Perry's involvement sparked a row in the UK about legal ethics, and whether British lawyers should be involved in helping Beijing's ongoing crackdown on dissent in the restless financial hub.

On Wednesday, Hong Kong's Department of Justice said "growing pressure and criticism from the UK community", as well as the city's lengthy quarantine requirements during the coronavirus pandemic, had led to Perry pulling out.

"Mr Perry, QC, expressed concerns about such pressures... and indicated that the trial should proceed without him," the department said in a statement, calling criticism of Perry's role in upcoming trials "ill-informed".

"I understand in the case of Mr Perry, in relation to the pro-democracy activists, and of course from Beijing's point of view, this would be a serious PR coup," Raab told Sky news.

Unlike the opaque, party-controlled legal system on China's mainland, where conviction rates are around 99 percent, Hong Kong maintains an independent common law system which has formed the bedrock of the city's economic success.

It is not unusual for lawyers from other common law jurisdictions overseas to work in Hong Kong, both on defence and prosecution teams, as well as in commercial and contract law; and foreign judges also do stints on the city's top court.

Perry has been a regular Department of Justice pick to prosecute high-profile cases, but his dropping out of this trial illustrates the quandary foreign lawyers and judges can now face in engaging with Hong Kong's legal system, which has come under enormous pressure recently.

It also toppled the legal firewall between the two territories, giving China jurisdiction over major national security cases and allowing its security agents to operate openly in the city for the first time.

Nearly 100 people have been arrested since the law came in and could face life sentences if convicted.

The trial Perry was involved in is not a national security prosecution.

Instead it centres on the involvement of nine of the city's most prominent activists on charges of attending or organising some of 2019's democracy protests.