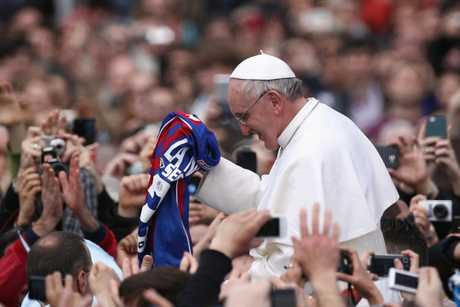 Pope Francis, an avid football fan, congratulated Spezia on their dramatic Italian Cup win against Roma, in an audience at the Vatican on Wednesday.

Spezia will face Napoli in next week's quarter-finals after shocking the capital city side 4-2 after extra time late on Tuesday.

"Congratulations, because you did well yesterday," the Argentine pontiff told Vincenzo Italiano's outfit, who are playing their first ever Serie A season.

"In Argentina, we dance the tango, and the tango is music in two-four (time). Today you are four to two, OK," the 84-year-old pope told them, according to a Vatican statement.

"Congratulations and keep it up!"

He described sport as a "wonder" that brings out the best in people.

Francis is a keen follower of Buenos Aires team San Lorenzo and has spoken of his joy of playing football on the city's streets as a child.