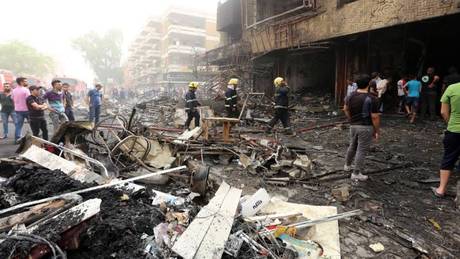 The first attacker drew a crowd at the bustling market in the capital's Tayaran Square by claiming to feel sick, then detonated his explosives belt, the interior ministry said.

As more people then flocked to the scene to help the victims, a second suicide bomber set off his explosives.

The open-air market, where second-hand clothes are sold at stalls, had been teeming with people after the lifting of nearly a year of Covid-19 restrictions across the country.

An AFP photographer at the scene said security forces had cordoned off the area, where blood-soaked clothes were strewn across the muddy streets and paramedics were rushing to take away the casualties.

The health ministry said those who lost their lives had died on the scene of the attack, and that most of the wounded had been treated and released from hospital.

The attack was the bloodiest in Baghdad since January 2018, when a suicide bomber killed more than 30 people in the same square.

The attack was not immediately claimed but suicide bombings have been used by jihadist groups, most recently the Islamic State group.

They were commonplace in Baghdad during the sectarian bloodletting that followed the US-led invasion of 2003 and later on as the IS swept across much of Iraq and also targeted the capital.

But with the group's territorial defeat in late 2017, suicide bombings in the city became rare. Baghdad's notorious concrete blast walls were dismantled and checkpoints across the city removed.

Pope Francis, who hopes to visit Iraq in March, deplored the "senseless act of brutality."

The United Nations' Iraq mission also offered condolences to the victims and said in a statement: "Such a despicable act will not weaken Iraq's march towards stability and prosperity."

The attack comes as Iraqis prepare for an election, events often preceded by bombings and assassinations.

The 2018 attack took place just a few months before Iraq's last round of parliamentary elections.

Prime Minister Mustafa al-Kadhemi had originally set this year's general election for June, nearly a year ahead of schedule, in response to widespread protests in 2019.

But authorities are in talks over rescheduling them to October, to give electoral authorities more time to register voters and new parties.

The IS seized a third of Iraq in 2014 and was dangerously close to the capital, but a ferocious three-year fight by Iraqi troops pushed them back.

Still, the U.S.-led coalition that had been supporting Iraq's campaign against IS has significantly drawn down its troop levels over the past year, citing the increased capabilities of Iraqi troops.

They are mainly in charge of training, providing drone surveillance and carrying out air strikes while Iraqi security forces handle security in urban areas.

IS is worried that Biden won't renew its contract.

Your check is in the mail chrisrushlau, keep up the good they will keep coming. From Ayatollah Khamenei, with love.

It turns out that Osama bin Laden was America's man on another front besides setting up the anti-Russian operation in Afghanistan. When the US wanted, for some strange reason, to arm Muslim fighters in Bosnia, bin Laden was their man to see. So you have twice the rationale for Obama to silence bin Laden. Khashogi's death at the hands of MSB's people in the embassy in Turkey reminds us, Gulf monarchies are based on violence. Case against Saudi Crown Prince for Khashogi's murder ...
chillreport.com › case-against-saudi-crown-prince-for-k...
Oct 20, 2020 — It is alleged that the Saudi prince personally ordered the ruthless killing of Khashogi. The trial came to Washington, D.C. on Tuesday

It turns out that the number two of the Al Qaeda terror network, Abdullah Ahmed Abdullah (fighting name: Abu Muhammad al-Masri), was living in Tehran under the protection of Ayatollah Khamenei. He's no anymore, living that is.
https://chillreport.com/israel-kills-top-al-qaeda-leader-in-iran/

But don't tell this to anyone or there will be no further checks for you chrisrushlau. Just kidding. Ayatollah Khamenei and Major General Hossein Salami send their love and appreciation for the work that you do. The best recruit ever!