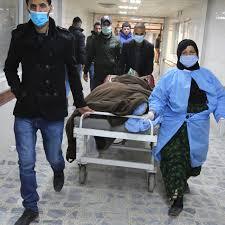 Frantically dashing between hospital beds, Baghdad residents tried to track down relatives who may have died Thursday in a twin suicide blast -- the deadliest attack in years.

There, in the morning, two suicide attackers detonated their explosives in an open-air flea market where huge crowds, including day laborers, usually gather.

Clusters of young men had done just that on Thursday, desperate for a day's wages as Iraq struggles through its most dire fiscal downturn in years.

Many of them remain unaccounted for.

"My brother is married and has two children. He went out this morning to earn a living for his little ones and now he's nowhere to be found," Abbas Samy, 25, told AFP.

Samy rushed to Sheikh Zayed hospital after the blast in an attempt to locate his brother -- to no avail.

"How will his kids live?" he cried out.

Iraq's Health Minister Hassan al-Tamimi said at least 32 people had lost their lives in the attack and 110 were wounded, most of them treated and sent home by the country's worn-down medical facilities.

He spoke at Al-Kindi hospital, where nurses in blue navigated a wounded man on a stretcher between families running in the hallways.

Tamimi leaned down to speak to a man struggling to breathe through a ventilator.

The minister did not say how many people were still missing.

Mazen al-Saadi, 34, said he was lucky to be alive.

He was shopping in Tayaran Square with a good friend when the blasts ripped through the market around them.

"He was just a few meters (yards) in front of me. After the blast, he just vanished and I wasn't able to find him -- until now," Saadi told AFP.

After a few hours of searching, he had just located his friend's body at the Sheikh Zayed morgue.

With a sense of bitter resignation, Saadi said he had anticipated a return to violence in his native Baghdad.

"We were always thinking about the explosions coming back -- we thought they could return at any moment, especially as the elections were getting closer," he said.

Iraq's Prime Minister Mustafa al-Kadhemi had planned to host early parliamentary elections in June, but authorities are discussing a delay to October to allow voters and parties more time to register.

Elections in Iraq have often been preceded by months of instability, including the last legislative vote in 2018.

In January of that year, a suicide attack in Tayaran Square left more than 30 people dead. In the preceding years, a normal day in Baghdad could see 15 car bombs blow up across different neighborhoods.

But since then, Baghdad's residents have largely grown accustomed to quiet, with attacks becoming rare and concrete blast walls across the city being dismantled.

"Now, we're afraid it'll go back to the way it was before," said Saadi.

"Where are the intelligence services? How did the attackers infiltrate the heart of Baghdad?" screamed 40-year-old Abu Zaynab, whose brother died in the blast.

"Iraqis are just cannon fodder for corruption and political infighting."

An intelligence source who spoke to AFP on condition of anonymity admitted there was a shortcoming.

"We had been on high alert for the end of the year, waiting for an attack then. But when nothing happened, we let our guard down," he said.

That provided little relief for victims of the attack or their families.

At Sheikh Zayed, families could be heard lamenting that they had searched a half-dozen hospitals in the city for their loved ones in vain.

"They won't pick up their phones and we have no idea what happened to them," one man cried out.

"Poverty and the economic situation were getting worse, and today we're going back to the explosions," he told AFP.

"Life has become impossible in this country."