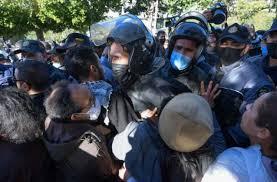 The North African country, where the Covid-19 pandemic has deepened already acute economic pain, has seen young people hurl rocks and petrol bombs at police who have deployed teargas and water cannon at the crowds.

Wednesday night was relatively calm compared with previous evenings, although local media reported disturbances in the central town of Sidi Bouzid, where the Arab Spring pro-democracy uprisings started a decade ago.

Authorities said Monday they had made 600 arrests, then reported another 70 over the following two days -- but a coalition of Tunisian groups said their own count was now much higher.

"There are 1,000 people arrested" including many minors, said Bassem Trifi of the Tunisian League for Human Rights, who charged that many arrests had been "arbitrary," including of people inside their homes.

"Some were arrested without having taken part in the demonstrations," he told a joint press conference of a dozen groups, also including the journalists' union and young lawyers' association.

Some activists had been detained for voicing support for the protests on Facebook and other sites, and at least one of them now faces six years prison if convicted, the groups said.

"We are asking the justice system to look closely into the cases," said Trifi.

"We will not manage to resolve the crisis in this way. It can only deepen the gulf between the people and the government."

In a joint statement, the groups called on the judicial system to investigate reports of violations by security forces, ill-treatment of detainees and breaches of their personal data privacy.

They warned that "violent security practices would only... aggravate the crisis of the rejection of the state".

Unrest again shook several towns overnight into Thursday, though the clashes appeared to ease from their earlier peaks when angry groups set fire to tyres to blockade streets.

In the central town of Sbeitla, clashes broke out following rumors that a young man had died of injuries he had sustained when he was earlier hit by a tear gas canister.

The interior ministry denied the young man's death, saying he had been transferred to a hospital in the coastal city of Sousse, and that it had opened an investigation into his case.

The demonstrations were sparked by the self-immolation of young fruit seller Mohamed Bouazizi in Sidi Bouzid, triggering similar revolts across much of North Africa and the Middle East.