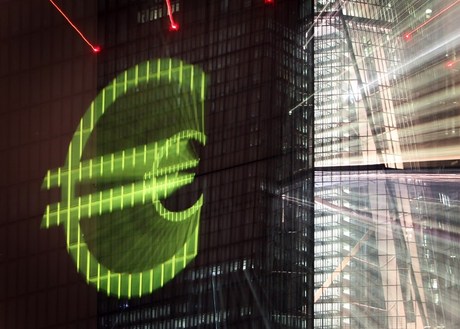 That marked a swift change from optimism on Wednesday as Joe Biden was inaugurated as the 46th U.S. president.

ECB policymakers left key interest rates on hold however, and took no fresh action after ramping up their pandemic support last month.

The euro fell in value against the pound, with the British currency buoyed by the UK's early vaccine rollout, analysts said.

The stronger pound, which briefly hit a 2.5-year high versus the dollar, weighed on London's benchmark FTSE 100 index, especially on multinationals that record substantial earnings in the U.S. currency.

Europe's single currency also gained ground against the dollar, and Lagarde emphasized during a press briefing: "We are monitoring very carefully exchange rates."

But at the end of the day, UniCredit research chief Marco Valli remarked that the ECB's "foreign exchange rhetoric did not change, confirming that the euro has not yet approached the GC’s (governing council's) pain threshold."

The Bank of Japan revised its growth outlook upwards for the next two years meanwhile, and maintained its ultra-loose monetary policy while noting it was hard to establish clear forecasts owing to the pandemic.

On Wednesday, Biden signed a flurry of executive orders, starting with rejoining the 2015 Paris climate accord and keeping the United States in the World Health Organization.

On the other hand, new U.S. jobless claims fell marginally from the prior week, but remained at 900,000, a stunningly high level some 10 months into the coronavirus pandemic.

"The consensus view now (is) that... Biden's early focus will be more on growth than tax hikes," said Axi strategist Stephen Innes.

Meanwhile, "central banks may have a little more to do yet if we're going to see the turbo charged recovery we're hoping for," Oanda trading group analyst Craig Erlam told AFP.