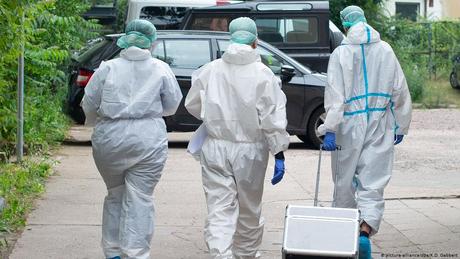 Germany on Friday recorded more than 50,000 deaths from the coronavirus since the start of the pandemic, as public health officials expressed cautious optimism about a slowing infection rate.

The Robert Koch Institute (RKI) disease control centre said 859 people died from the virus in the past 24 hours, bringing the total number of fatalities to 50,642.

"That is a distressing, incomprehensible number to me," RKI chief Lothar Wieler told reporters.

Nevertheless, Wieler said he saw hopeful signs in the latest, lower figures on new infections that a partial lockdown introduced in November and tightened in December was starting to have the desired effect.

The RKI said it had registered 17,862 new cases since the previous day, bringing the total number of infections in the pandemic to more than 2.1 million.

Wieler said he saw a "slightly positive trend" in the numbers after several days in the last month with new infections above 20,000.

However he urged the government to maintain the current restrictions until Germany sees a "massive" drop in cases and deaths.

At the same press conference, Health Minister Jens Spahn called the figures "encouraging" but warned they were "still too high".

He noted that several countries that had eased their lockdowns at the first sign of improvement "quickly saw a new flare-up".

Reporting about 4,800 patients in intensive care, health officials said there was no evidence that the Christmas and New Year's holidays under country-wide restrictions on gatherings had led to a spike in critical hospitalisations.

The country this week extended its current lockdown until February 14, and Chancellor Angela Merkel has not ruled out border checks to slow the spread of new, more contagious variants of the virus.

It closed restaurants, leisure and sporting facilities in November, then expanded the shutdown in mid-December to include schools and most shops to halt runaway growth in new coronavirus infections.

New cases have soared far above the 50 per 100,000 people threshold set by the government for any relaxation of the restrictions, and currently stand at 115.3 over the past seven days.

The RKI figures are based on people who died directly as a result of the illness caused by the virus and those who contracted Covid-19 but whose exact cause of death could not be confirmed.

Beginning on Friday at sunset, Steinmeier said he would place a light in the window above the main portal of his palace in central Berlin "to bring light in this dark time".

He encouraged Germans to do the same at their homes and post photos on social media with the hashtag lichtfenster (light window).

"Behind every number there is a human fate -- it is a human being who was lost whom we held in our hearts. That is why we need this sign of silent remembrance," he told reporters.

After Easter in early April, Steinmeier said he would hold a central memorial service in Berlin for those Germany lost to the coronavirus.