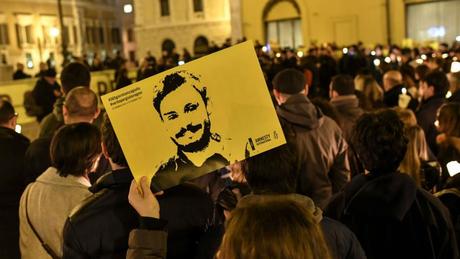 Italian President Sergio Mattarella on Monday urged Egypt to cooperate with prosecutors seeking to try four Egyptian security officers over the torture and murder of an Italian student in Cairo.

In a statement marking five years since Giulio Regeni went missing on January 25, 2016, the head of state called for a "full and adequate response" to the Italian investigation.

The mutilated body of Regeni, a 28-year-old PhD student researching the sensitive topic of trade unions in Egypt, was found on the outskirts of Cairo days after he disappeared.

His death sparked outrage in Italy and strained diplomatic relations between the two countries, with Italy's government accusing Egypt of failing to cooperate.

Prosecutors in Rome formally requested a trial in absentia last week for four Egyptian security officers on charges of kidnapping, conspiracy to murder and grievous bodily harm, with a preliminary hearing set for April 29.

Mattarella said the death had inflicted a "very deep wound in the hearts of all Italians" and said his thoughts were with Regeni's parents, who have campaigned for justice.

"We expect a full and adequate response from the Egyptian authorities, as has been constantly requested by our diplomats," he said.

Italian prosecutors say Regeni suffered days of ill-treatment before his death. His mother, Paola Defendi, said she only recognised her son by "the tip of his nose".

In December, Egypt's public prosecutor cleared five police officers of responsibility of the murder and said he would drop the case -- a decision Rome branded "unacceptable".

That group included the four men accused by Rome.

Despite the diplomatic tensions over the case, Italy last year approved a $1.2-billion (now 988 million euro) sale of two warships to Egypt.