Biden Talks the Talk in First 10 Days -- But Can He Deliver? 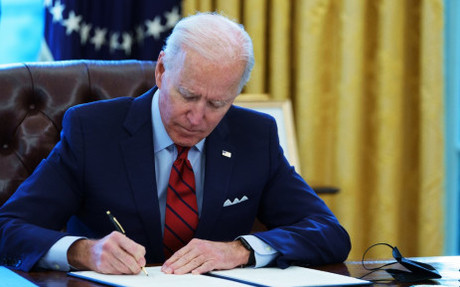 Normal is the new extraordinary under President Joe Biden.

"It's been a busy week," he said in the Oval Office on Thursday.

Biden was referring to the cascade of executive orders he has signed since taking power on January 20, overturning rules enacted by Donald Trump on everything from immigration to health care.

But Biden's most dramatic achievement in 10 days has simply been to remind Americans of a White House where nothing unexpected happens.

-- No Twitter rages. No branding journalists enemies of the people. No demonizing the opposition party.

-- Daily, detailed, fact-filled, even dull briefings by experts on Covid-19, the economy and more.

-- A president appealing for unity and appearing often in public -- but always carefully stage managed and never for too long.

-- A secretary of state, Antony Blinken, reassuring the world's diplomats that the United States they thought was gone is back.

It adds up to major change. Yet none of it is remarkable.

As late night show host Stephen Colbert quipped about the main difference between Biden's coronavirus plan and Trump's version: "There is one."

To misquote a famous line about the economy from Bill Clinton's presidential campaign, everything now boils down to "the virus, stupid."

Covid-19 is on track to kill half a million Americans.

And data Thursday showing the sharpest economic contraction since 1946, with GDP shrinking 3.5 percent in 2020, illustrated the financial impact of all those shuttered restaurants, empty airliners and laid-off workers.

So Biden's presidency could hinge on what happens next.

Get Americans vaccinated, then ride the economic revival and Biden could turn disaster into triumph. Fail and he may carry that to the end of his term.

"The success of everything else really hinges on that," said Mark Carl Rom, who teaches politics at Georgetown University.

Can ordinary people "go to the beach and not worry about getting sick and dying?" Rom asked.

"That would be an enormous step."

Biden's other mega challenge is to restore unity in a country that Trump's presidency split down the middle.

The Democrat has spoken almost daily about this mission, often movingly. And he has taken steps to cool the temperature after an election season that ended with Trump's supporters storming Congress.

For example, when asked repeatedly for an opinion on the coming Trump impeachment trial, Biden and his press secretary Jen Psaki refuse to take the bait, saying the matter is for lawmakers to decide.

Biden also declined to get involved in an ugly fight in the Senate when some Democrats tried to get rid of the filibuster -- a rule effectively forcing Democrats and Republicans to work together to pass bills. The rule remained in place.

But America remains in turmoil, not least because of hyper-partisan media outlets and disinformation-filled social media.

Biden did not appoint any high profile Republican in his cabinet, as some had predicted he would.

And he is taking flack for all those executive orders, which bypass Congress altogether and critics see as overreach. Even The New York Times editorial board chided him Thursday, saying "this is no way to make law."

Pressured by the left to push hot-button issues -- like the federal funding for abortion counseling that he authorized Thursday -- and by the right to remember that Trump won 74 million votes, Biden is in a tough spot.

His biggest next test will be getting bipartisan Senate support for his signature opening bill -- a gigantic, $1.9 trillion Covid economic relief package. So far the signs are not good.

But the White House insists that Biden, a longtime former senator, is uniquely placed to get the two sides talking.

"Unifying the country is addressing the problems that the American people are facing, and working to reach out to Democrats and Republicans to do exactly that," Psaki said Thursday.

And for now, Biden has the wind in his sails.

Fifty four percent approval in a Monmouth University poll released Wednesday might not sound like much, but anything north of 50 is not to be sniffed at these days.