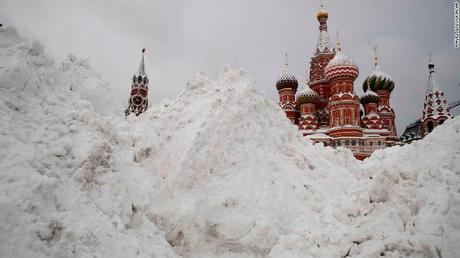 Moscow was bracing Wednesday for record snowfalls over the weekend, as weather experts predicted a record-breaking "snow apocalypse" in the Russian capital.

Top expert of the Fobos weather center Yevgeny Tishkovets said that the snowstorm would strike Moscow with "very high intensity" from the early hours of Friday and last for the next 36 hours.

He added that winds would reach speeds of 15-20 meters per second while temperatures would drop to as low as -15 degrees Celsius (5 degrees Fahrenheit).

"This is a real snow storm, snow Armageddon, snow apocalypse, this not a drill, but combat," Tishkovets was cited by the RIA Novosti news agency as saying.

A spokeswoman for Russian meteorological service Roshydromet, Marina Makarova, told AFP that the storm is a continuation of the so-called "Beast from the East" that has swept across Europe over the past week.

She said that the agency predicts snowfall in the Russian capital from Friday through to Sunday totaling up to around 40 centimeters (16 inches).

With some 35 centimeters of snow already blanketing Moscow, she said, the depth of snow in the Russian capital could approach or even surpass the record high of 77 centimeters set in March 2013.

Makarova added that the expected intensity of the storm was a result of a cyclone sweeping down from the north, first picking up cold air that then mixed with hot air over the Black Sea, before turning back up towards central Russia.

Scientists say that as the surface layer of oceans warm due to climate change, cyclones are becoming more powerful and carry more precipitation.

In preparation for the snowstorm, Moscow's deputy mayor for housing and public utilities, Pyotr Biryukov, was cited by RIA Novosti as saying that 13,500 thousand snowplows and 60,000 workers would be deployed to deal with the fallout of the storm.

"Round-the-clock shifts have been organised," he said.