Families of Port Blast Victims Rally, Vow to 'Take Justice on Their Hands' 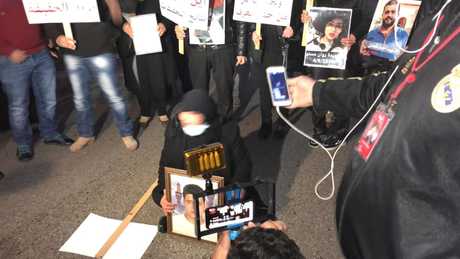 Relatives of the Beirut port blast victims held a protest Thursday and blocked traffic with burning tires outside the Palace of Justice in Beirut after the lead judicial investigator probing the case was removed by the Court of Cassation.

“The blood of our martyrs is still on the ground, so do not turn us into killers! We are willing to take our right with our hand and we will start escalating as of tonight,” a spokesman for the families said.

“We will not leave the streets… Today you killed us anew, the investigation ended and we returned to square one,” he added.

"Don't be afraid. Don't leave the case," said Yousra Abou Saleh, a mother who lost her son in the explosion, pleading with Sawwan.

In a reference to the ruling class, she said, weeping: "God is greater than all of them."

Sawwan was removed following legal challenges by two former ministers he had accused of negligence that led to the blast. The Court of Cassation called for a new investigating judge to be appointed to lead the probe, nearly six months after it had started.

The development is likely to further delay the investigation into the horrific explosion that killed more than 200 people, wounded over 6,000 and disfigured much of Beirut.

Families of the victims and survivors have blamed the ruling political class for corruption and negligence that led to the explosion of ammonium nitrate, a dangerous chemical that had been stored in the port for years.

The explosion, one of the largest non-nuclear blasts in history, has been one of the most traumatic national experiences the Lebanese have faced. Family members of those killed had been skeptical of a transparent and independent investigation into the Aug. 4 explosion, in a country where a culture of impunity has prevailed for decades.

Sawwan had accused and summoned for questioning Lebanon's caretaker prime minister and three former ministers on suspicion of negligence that led to the deadly explosion.

Two of the former ministers challenged Sawwan in court in December, accusing him of violating legal and constitutional procedures and asking that he be recused. Last month, the Court of Cassation had asked Sawwan to resume his work while it looks into the complaints.

On Wednesday, he summoned the third former minister for questioning. The minister tweeted that he would not show up.

According to the law, the minister of justice now has to propose a new lead investigator, before a government-appointed judicial body signs off on the nomination.

Sawwan's appointment process itself was considered opaque and the investigation, so far secret, has been tainted with political interference, Human Rights Watch has said. Two judges named by the justice minister before Sawwan were rejected without an explanation by the body in charge of approving the selection.

The families of the victims had welcomed Sawwan's decision to summon senior officials, saying no senior politician should be spared.

Why the passive tense? Why not say "Nabih Berri, using his tool, the chief of court of cassstion, removed Fad Sawwan"

Stop talking and take action. If I had lost a loved one in the blast I’d be storming Baabda already.