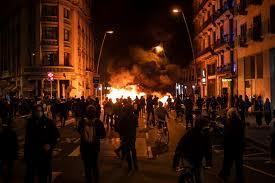 At Saturday's protest, a hood covers one young woman's hair, a mask her face.

Only her dark eyes can be seen staring out at the latest demonstration in Barcelona against the jailing of Spanish rapper Pablo Hasel.

Hasel was jailed for the radical -- his critics say incendiary -- lyrics of his work. His supporters say what happened to him illustrates the lack of free speech in Spain.

But for Maria (not her real name), his arrest and imprisonment last week was the spark that lit a larger bonfire of other grievances.

"We are fed up with injustices, job insecurity, repression and this has made us explode," the 20-year-old history student told AFP.

The protests have been going since Tuesday in Barcelona, when police forced their way past barricades at the Catalan university where Hasel and his supporters were holed up to arrest him.

In the nights that followed, police and protesters clashed repeatedly in the streets of Barcelona, Spain's second city and the capital of the northeast region of Catalonia.

They fought at the makeshift barricades, around the burning dumpsters in the streets of the city.

The unrest spread to other cities in the region, where separatist sentiments run deep and suspicion of Madrid is strong. In Vic, for example, 11 police officers were injured after demonstrators attacked a police station there.

Police detained 38 people and there were 13 people injured during Saturday night's clashes across Catalonia.

Over the last few nights, young people's growing anger has overwhelmed any fear they might have about clashing with the police. Protesters have jumped on to police cars, even chased them.

Nor have police charges -- and the firing of foam rounds that have already cost one young woman protester an eye -- deterred them.

"It's really scary to come here and to be arrested, take a beating or lose an eye," said Maria.

"But it's scarier to stay at home and not to fight for our rights."

This is not her first time protesting on the streets.

She was among those who protested in October 2019, during the five nights of unrest in Barcelona after a court handed down jail terms to nine Catalan separatist leaders for their failed 2017 independence bid.

This time round, the protests have spread beyond Catalonia to cities across Spain, including the capital Madrid, Valencia in the east and Granada in the south.

And most of those on the streets have been young people.

The unrest has also allowed others to exploit the chaos to loot luxury shops, hotels and even car dealerships.

"There are a lot of things behind it," another student protester, Alba, told AFP.

Don't let her frail physique and soft voice mislead you. Even at just 20 years old, she has years of experience as a climate activist behind her -- and her message is uncompromising.

"We see that society is collapsing on many levels -- economically, ecologically, socially -- and our generation will be the one to pay the bill," she said.

"We are fighting because we refuse to be a lost generation."

When asked what fuels their anger, young protesters raise the same issues.

Youth unemployment in Spain, at 40.2 percent, is the highest in the European Union.

Those openings to be had are not so much the jobs for life enjoyed by previous generations, but more often one internship or short-term contract after another.

And the cost of renting has soared in recent years, particularly in sought-after cities such as Madrid and Barcelona.

The pandemic has only added to their problems, with young people often blamed for the increase in infections in a country that has been hard hit by the coronavirus.

Nor has the sight of burning barricades in the city streets gone down well with everyone. Some local people have remonstrated with the protesters -- even trying to put out the fires using hoses from their balconies.

"The violence is a complex issue," said Xavi Perez, who attended Saturday's protest.

"Violence cannot be defended, but it is also true that the purely peaceful protest has not got us anywhere either.

"So we will have to do something else."