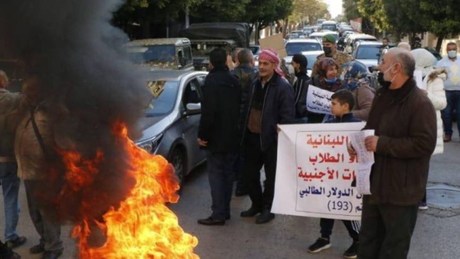 Families of students studying abroad protested on Monday against “procrastination” by Lebanese banks in implementing the so-called Student Dollar law that enables them to transfer funds to their children studying abroad.

In Beirut’s area of Hamra, the families blocked traffic with burning tyres at the Roma intersection. Police later succeeded in unblocking the road.

In the northern city of Tripoli, the families of students blocked access to some banks and prevented employees from entering.

In 2020, Lebanon’s parliament approved the Student Dollar law that obliges Lebanese banks to dispense $10,000 according to the official exchange rate (LBP 1,515 to the dollar) to every Lebanese student who enrolled in a foreign university or technical institute prior to the 2020-2021 academic year.

Earlier in February, the Association of Banks in Lebanon called, in a circular, all banks for a total commitment to continuing the implementation of transfers to Lebanese students abroad who were registered in universities in 2019, according to the relevant circular of the Bank of Lebanon. In order to preserve the few available resources, it also called to make sure that students are actually enrolled in the university as well as tuition installments owed.

But Lebanese banks have so far ignored application.

The Lebanese currency has dropped by 80% compared to the end of 2019 amid a severe financial and economic crisis -- the worst in Lebanon's modern history.