All Over by Summer? UK Govt. Eyes Return to Normal by End of June 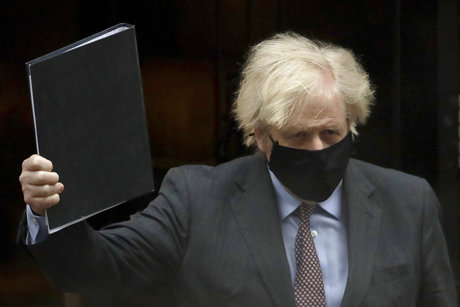 British Prime Minister Boris Johnson on Monday set out a four-step plan to ease coronavirus restrictions, expressing hope that life could get back to normal by the end of June.

In a statement to parliament, he outlined a "gradual and cautious" approach to lifting curbs in England, starting with the reopening of schools from March 8 and non-essential retail from April 12.

Some fans could be able to attend sporting fixtures from May 17, while all social distancing restrictions could be removed from June 21 -- all subject to change and depending on scientific data.

The announcement is the first big step towards restoring normal life, nearly a year after Johnson imposed the first of three stay-at-home orders that have devastated Britain's economy.

Johnson told MPs that with a mass vaccination program easing pressure on overstretched hospitals, "the end really is in sight."

"A wretched year will give way to a spring and summer that will be very different and incomparably better than the picture we see around us today," he added.

The Conservative leader, who was accused of acting too late and relaxing curbs too early last year, said the plan would be "cautious but irreversible", ensuring no more lockdowns.

Opposition Labour leader Keir Starmer urged Johnson not to buckle in the face of pressure from Conservative lawmakers for a faster return to normality.

Such a move would "waste all the sacrifices of the last 12 months", Starmer warned.

Britain is one of the countries hardest-hit by the Covid-19 pandemic, with 120,757 deaths.

It was the first nation to begin mass vaccinations in December, but surging case numbers forced a return to lockdown and shut schools in early January after an easing of curbs over Christmas.

More than 17 million people have now received at least a first vaccine dose -- one-third of the UK's adult population.

The government was boosted on Monday by results from real-world studies that showed both of the vaccines it is using were effective in reducing serious illness.

"It is a huge day for us all, especially the team who've worked so hard, and monumental in our battle against coronavirus," said the University of Oxford's Teresa Lambe.

Over the weekend, Britain's government said it would seek to offer a dose to everyone aged over 50 by mid-April, and to every other adult by the end of July, accelerating the latter timetable from September previously.

Case numbers are falling again and early evidence suggests the vaccinations are reducing serious illness, after some intensive-care units were overrun last month and queues of ambulances formed outside hospitals, unable to transfer their patients.

Johnson said the planned relaxations would be uniform across England, after regionalized tiers were put in place last year, but stressed that further progress would hinge on factors such as any new Covid variants.

In an attempt to keep out new strains, Britain has imposed a ban on foreign holidays and on overseas citizens entering the country from places with high infection rates.

A decision will be taken on lifting travel bans in mid-May, raising hopes of a return to international vacations.

Vaccines minister Nadhim Zahawi confirmed earlier Monday that pupils would go back to schools en masse on March 8 rather than in a staggered return, insisting widespread testing would make it safe, despite misgivings from teaching unions.

Also from March 8, the government plans to allow elderly residents of care homes to receive indoor visits from one designated relative or friend, and limited social mixing by the public outdoors will be permitted.

The government laid out its plans in a 68-page document, which said the five-week intervals between the four stages were designed to allow for assessment of the relaxation measures.

Johnson outlined four tests for easing restrictions: the progress of the vaccine rollout, pressure on hospitals, infection rates and the emergence of any new coronavirus variants.

Scientists have warned about the dangers of easing restrictions too quickly while businesses broadly welcomed planned reopenings, but called for more government support to help their recovery.

"We now need to turn this road map into genuine economic momentum," said the director-general of the Confederation of British Industry, Tony Dankers.