Turkey Sentences Three to Jail over Ghosn Escape to Lebanon 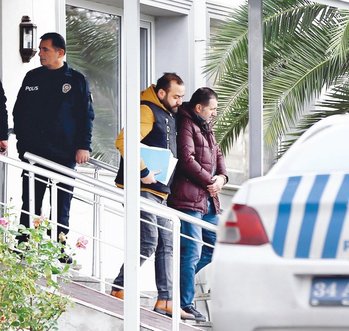 An Istanbul court on Wednesday sentenced three Turks to four years and two months in prison for helping smuggle former Nissan boss Carlos Ghosn in a musical instrument case to Lebanon from Japan.

The court convicted two pilots and an employee of a small private airline, who moved the tycoon while he was out on bail facing financial misconduct charges in December 2019.

The sentence was lighter than the maximum 12 years the pilots -- Noyan Pasin and Bahri Kutlu Somek -- and MNG Jet's Okan Kosemen faced after being charged last month with involvement in a conspiracy to smuggle a migrant.

The pilots told the court on Wednesday that they were innocent because they never suspected the high-profile Japanese carmaker's boss was on board their plane.

"They ask us to fly the plane and that is what we do," Pasin said.

The three will stay out of prison pending an appeal. The court also acquitted two other pilots and two flight attendants standing trial in the Turkish case.

Interpol issued a notice last year seeking Ghosn's extradition from Lebanon to Japan. The two countries have no extradition agreement and Lebanon has failed to comply.

Ghosn, who denies any wrongdoing, has remained effectively trapped in Lebanon due to the Interpol arrest warrant.

The Turkish trial tried to piece together how Ghosn -- a French-Lebanese-Brazilian national who was a global business superstar when his career came crashing to an end -- managed to find his way from Japan to Lebanon via Istanbul.

The 66-year-old was arrested in November 2018 and spent 130 days in prison before completing a cinematic escape act that humiliated Japanese justice officials and raised questions about who was involved.

The indictment said the plot involved a stopover in Istanbul instead of a direct flight "so as not to arouse suspicions."

Michael Taylor, a former member of the U.S. Special Forces, and his son Peter are accused together with Lebanese national George-Antoine Zayek of recruiting MNG Jet and overseeing the secret operation.

The two Americans lost their appeal to get their extradition to Japan blocked by the U.S. Supreme Court earlier this month.

The indictment said Taylor and Zayek put Ghosn "in a large musical instrument case" and then took him through security at Japan's Osaka airport.

The plane landed at Istanbul's old Ataturk airport and parked near another plane bound for Beirut.

The court found that MNG Jet's Kosemen then jumped off the Osaka plane and boarded the one destined for Beirut together with Ghosn.

The two pilots who were acquitted completed the Turkey to Lebanon leg of the journey.

"It's unfortunate I was involved in this affair. This is not something I did deliberately," Kosemen said.

Kosemen admitted helping smuggle Ghosn onto the second, Lebanon-bound plane, but claimed he was threatened and feared for his family's safety, according to testimony reported by the state-run Anadolu Agency.

Turkish airline company MNG Jet has admitted that two of its planes were used illegally in Ghosn's escape, flying him to Istanbul, and then to Beirut. The company said its employee falsified flight records so Ghosn's name didn't appear.

"I wasn't expecting this verdict," the pilot said. "There is no concrete evidence that what I did constitutes a crime."

The Turkish trial was running in parallel with a handful of hearings in Japan and the Taylors' case in the United States.

Nissan and its former bosses are accused in Tokyo of illegally concealing payments of 9.2 billion yen ($87 million at today's rates) promised to Ghosn on retirement.

Ghosn's former aide Greg Kelly faces up to 10 years in prison if convicted over the alleged payments.

Lawyer Erem Yucel said the two pilots who took Ghosn from Istanbul to Beirut were acquitted on a technicality, because the former Nissan chief's Lebanese nationality meant that he could not be considered a "migrant" being smuggled to Lebanon.

"Those who took him from Istanbul to Beirut were acquitted. We don't think this verdict is right. We will appeal and exercise our legal rights," Yucel, who represented Pasin, told reporters.

Pasin said: "We're being accused of piloting the plane... We didn't plan the flight. It was our company which planned and arranged everything and assigned us to this flight."

Ghosn, who has French, Lebanese and Brazilian citizenship, led Japanese automaker Nissan for two decades. The 66-year-old is wanted on charges of breach of trust in misusing company assets for personal gain, and violating securities laws in not fully disclosing his compensation.

He has said he fled because he could not expect a fair trial in Japan.

In addition to his trial in Japan, the businessman faces legal challenges in France from his time at the helm of the Renault-Nissan alliance, including allegations of tax evasion, money laundering, fraud and misuse of company assets.

According to media reports, Zayek, the Lebanese man who helped Ghosn escape along with the Taylors, was also present in the jet which made the trip between Japan and Turkey. Zayek presents himself on the AngelList and Bayt websites as a “security manager” who has worked in Iraq, Afghanistan, Libya, Egypt and Nigeria.

In the section where he describes his skills, one reads "war, weapons, hostile lands." Zayek is the youngest brother of Elias Zayek, a slain member of the Lebanese Forces.

Elias was the commander of the LF militia’s infantry during the civil war. He was assassinated on January 19, 1990. LF leader Samir Geagea was later convicted of ordering his murder.

George meanwhile was an LF fighter during the war. He made several stays in hospital, wounded several times, notably in the eye and in the leg.

Always discreet, George worked a lot in Iraq, notably for the American forces during the war of 2003. He also was involved in missions on behalf of private companies, organizing the protection of sensitive industrial sites in Iraq and other countries of the Middle East.

French weekly Le Point has said that he is described as “a brave man who likes to live dangerously.”

Yet, the Aouni fugitive criminal Ghosn is free and happy in Lebanon.