FPM Meets Patriarch, Says Ready to Assist in Any Proposal 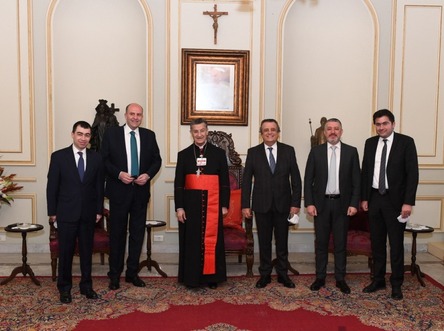 Maronite Patriarch Beshara el-Rahi received on Thursday a delegation from the Free Patriotic Movement in Bkirki, in the aftermath of his calls for a UN-sponsored international conference to handle the problematic Lebanese file.

“The meeting was an occasion to discuss political developments, most importantly the government formation file. We are ready to discuss any proposal on the basis of a comprehensive dialogue between the Lebanese,” MP Roger Azar of the FPM delegation told reporters after the meeting.

"We've discussed the need to form a cabinet, whose composition and program are capable of achieving the required reform and gaining the confidence of the Lebanese," he added.

Head of the Movement, MP Jebran Bassil, held a telephone call with Rahi during the latter’s meeting with the delegation.

"We have sensed His Eminence's keenness to accomplish the [electoral] deadline as soon as possible, within the framework of constitutional principles and on the basis of full national partnership, and we've informed him that we are ready to discuss and assist in any proposal," Azar added.

What a joke. FPM destroyed our independence and sovereignty and transformed Lebanon into Hizbollastan. FPM will be deserted in any new elections. Hizbollah is a creation of Iran’s criminal regime and therefore a foreign agent and an invading militia. Since 2000 Iran goal to equip Hizb with high precision rockets to create a balance of terror with Israel to serve as an attack dog for its nuclear aim and regional hegemony. This is obviously a kiss of death to Lebanon that prospers with its tourism, democracy and freedom and historic attractiveness to western firms. Aoun knew the risks but sold Lebanon for 30 pieces of silver for personal benefit. He and Bassil are a premeditated assassin of a country and the future of its children. They should rot in prison. They destroyed a country that had by far the best potential in the region. History won't be forgiving. Anyone supporting Aoun or Hizb is a traitor

Lebanon will only be free and prosperous when every Lebanese is convinced that every single Iranian rocket in Hizb arsenal is a mortal threat to Lebanon's freedom, sovereignty, independence, democracy and freedom. Also, enabling Hizb's Basij to enslave the Shia Community and with Aoun complicity welcoming Lebanon in Hell.

The problem of Lebanon is the Lebanese people. They can't stand each other, they have different vision and objectives, subsequently powerplay between warlords and political parties. Conclusion:
Lebanese people, start first by accepting each other, as long as you can't achieve this, militias will not vanish and misery will stay.