Verstappen 'Not Thinking' about Succeeding Hamilton ahead of F1 Season 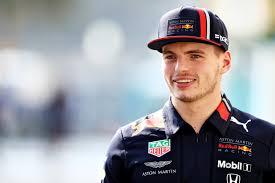 Max Verstappen said Thursday he is not thinking about succeeding Lewis Hamilton at Mercedes as he gets ready to launch a bid to dethrone the all-conquering Formula One champion.

Hamilton signed a one-year extension with the Silver Arrows for the 2021 season earlier this month, for what could be his last campaign for the team with which he has won six of his seven world titles.

"I don't know what Lewis is going to do at the end of the day," Red Bull racer Verstappen replied when asked by a reporter whether he saw himself as a potential successor.

"I am focusing on myself, on this year and try to make it a success, it's so early in the season, that kind of things I am not really thinking about at this stage."

Verstappen, 23, is considered one of the few who could end Hamilton's F1 hegemony as the 2021 season looms into view, with testing in Bahrain starting in two weeks' time.

The Dutchman finished third in the drivers championship last season, winning two GPs and collecting 11 podiums while his former teammate Alexander Albon could do no better than two third place finishes.

Red Bull finished second in the constructors championship, 254 points behind champions Mercedes, and Verstappen is hoping that the new RB16B car unveiled by Red Bull this week could help close the gap.

"With Mercedes being the dominant car towards the end of the season, we know of course that what have to keep improving," said the Dutchman.

"More grip, more power, it's all looking promising but it doesn't make sense now to hype everything up, the most important thing is to get a bit of track in Bahrain and to do the best amount of learning we can."

"I expect 'Checo' to do a good job, as he has always done in his career," Verstappen said. "I am excited to work with him and I hope we can bring the team a lot of points."