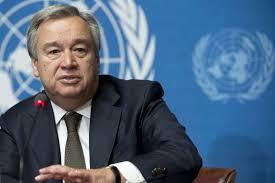 U.N. Secretary General Antonio Guterres has extended the Special Tribunal for Lebanon's (STL) mandate from 1 March 2021 for "a further period of two years, or until the completion of the cases before the STL, if sooner, or until the exhaustion of available funds, if sooner," the STL said on Thursday.

"The extension is in accordance with Security Council resolution 1757 (2007)," the STL added in a statement.

In his statement, Guterres reaffirmed "the commitment of the United Nations to support the STL in the fight against impunity for the crimes under its jurisdiction, in order to bring those responsible to justice."

“I am grateful for the international community’s continued support towards the STL’s work, which serves as a strong global message that terrorist crimes will not go unpunished. Together with my colleagues at the Tribunal, I remain highly committed to fulfilling the STL’s mandate in a timely manner and render justice to the victims through fair and transparent proceedings," said STL President Judge Ivana Hrdličková.

Hrdličková had requested the two-year extension to allow the Tribunal to progressively draw down its activities and complete the judicial work before the different Chambers.

The mandate of the Special Tribunal for Lebanon, which is based near The Hague in the Netherlands, is to hold trials for those accused of carrying out the attack of 14 February 2005 in Beirut, which killed 22 people, including the former Prime Minister of Lebanon, Rafik Hariri, and injured 226 more.

The trial in absentia of four Hizbullah suspects indicted over the killing began in January 2014. On 18 August 2020, Salim Jamil Ayyash was convicted in relation to five counts relating to the attack. In the same judgment, the three other accused, Hassan Habib Merhi, Hussein Hassan Oneissi and Assad Hassan Sabra were found not guilty.

The Special Tribunal for Lebanon also has jurisdiction over attacks carried out in Lebanon between 1 October 2004 and 12 December 2005 if they are connected to the attack of 14 February 2005 and are of a similar nature and gravity. Pre-trial proceedings began in 2019 against Ayyash in relation to three attacks against Marwan Hamade, Georges Hawi and Elias Murr that occurred on 1 October 2004, 21 June 2005 and 12 July 2005 respectively.