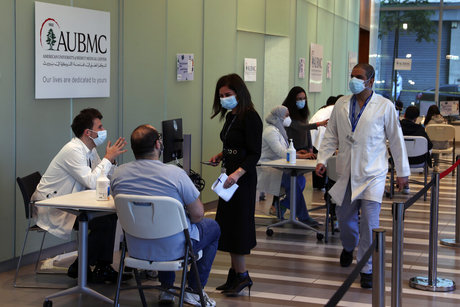 The administration of the American University of Beirut Medical Center issued a statement Friday clarifying information attributed to the state-run Central Inspection bureau, which claimed that 1,600 people who had not registered on the Health Ministry’s electronic platform have received the Covid-19 vaccine at AUBMC.

“AUBMC administration is keen to clarify that these allegations are inaccurate,” it said in an English-language statement.

“Indeed, the vaccination campaign was launched on February 14, 2021, a day designated for healthcare workers registered in the first priority category as per the Ministry’s guidelines. When the platform was launched on that date, only one appointment appeared on the system,” AUBMC explained.

“Because of this malfunction and in the presence of His Excellency, the Minister of Public Health, Dr. Hamad Hassan; the Head of the National Immunization Committee, Dr. Abdel-Rahman Bizri; the Minister of Public Health principal advisor, Dr. Muhammad Haidar; and representatives of Pfizer, AUBMC administration was asked to proceed with vaccinating its healthcare workers who are already registered on the platform,” it added.

“As agreed with the MoPH, data on these workers was to be forwarded to the ministry within 48 hours to finalize their registration at the platform. In fact, 536 individuals who were registered on the platform were vaccinated on the day, and their data was submitted within the required period,” AUBMC said.

It added that on the following day, February 15, a day dedicated to the vaccination of healthcare workers and the elderly above 75 of age, vaccinations started through registration on the Ministry’s platform although “several malfunctions remained unresolved.”

“These technical issues hindered the proper flow of the vaccination process, and a large number of elderly individuals arrived at AUBMC showing appointments sent to them by phone messages. These appointments were not visible on the platform so AUBMC staff could not rely on them to vaccinate people,” it explained.

“After contacting and consulting with Dr. Bizri and Dr. Haidar, vaccination proceeded with all scheduled elderly individuals who presented to the center even if their names were not showing on the platform. This helped reduce the inconvenience caused by the platform malfunction,” AUBMC went on to say.

It added that with the gradual improvement of the performance of the platform in the following days, a total of 2467 individuals who were registered on the platform and received text notifications of their appointments, were vaccinated by the end of the first week.

On the other hand, 1648 individuals who had already registered on the platform were vaccinated without appointments during the malfunctioning of the platform system.

“In due time, the list of these individuals were provided to the Ministry, which was fully aware of the major difficulties precipitated by the recurrent malfunctions of the registration procedure at the platform,” AUBMC said.

It added that it is “keen to reaffirm that no person who was not registered on its electronic platform or on the system provided by the Ministry of Public Health and supervised by the National Committee for Corona Vaccine has been vaccinated at its center.”

Parliament’s Deputy Speaker Elie Ferzi had claimed Wednesday that “the observatory of the American University has admitted that more than 50% of people who received the vaccine did not have their names registered on the (national) platform.”