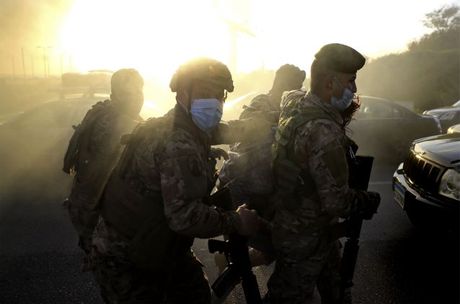 The anger of the Lebanese grew on Wednesday, on the second day after the unprecedented collapse of the Lebanese pound’s value as the dollar exchange rate hit 10,000 pounds.

Protests against the worsening living crisis spread to several Lebanese regions. Roads were blocked with barrels and burning tires in the north, south and Bekaa region.

Lebanon’s president Wednesday ordered the central bank governor to open an investigation into currency speculation, after the Lebanese pound plunged to record lows on the black market this week.

On the other hand, according to Asharq el-Awsat, information emerged yesterday that efforts “succeeded” at calming the rhetoric between the Maronite Patriarchate and Hizbullah.

On Saturday, the Patriarch voiced calls for an end to a “coup situation” against the State in Lebanon. Upon the insistence of mediators, Hizbullah took the “initiative” to contact a member of the dialogue committee between the two parties, requesting a close meeting.

The Patriarch is expected to reply on Friday whether he will have this meeting with Hizbullah, according to the daily.

Bickering between Lebanon's political rivals has left the country in a stalemate for months, only worsening the economic disaster sparked by a debt crisis and sovereign default last year. Disagreements between Aoun and Prime Minister-designate Saad Hariri have delayed the formation of the government for more than four months.

There are so many things wrong with the state of Lebanese politics, any changes suggested by this caretaker government or next set of parliamentarians will not bring any real or lasting change to Lebanon. We are a failed stated. It's over.

Largest bomb in history 8/4. And major economy collapse of the state. Enough to get every official to resign.

Anger, yet they will go and vote for the same people and worship the same leader and identify as Sunni, Shiite, Druze, Maronite, Catholic, orthodox, etc...and not as lebanese

Need I remind you that the majority (51%) abstained during the last elections? You’re saying nonsense rabiosa. And in the 49% of those who voted many were fraudulent, reports indicated that even some dead cast their votes.

So no rabiosa, you’re wrong. The problem is that the electoral laws are flawed on purpose and till they’re changed, the same people will get re-elected indefinitely.

What did I say that was wrong?

Yes I know the electoral law is crazy. I never liked any of the laws proposed. I only favor the ONE MAN ONE VOTE. It's the only solution to change the current political class and make each MP beholden to voters and not sects, or religious heads or warlords.

I thought the Lebanese could not be united because of the different cultures in the different religious communities. The truth is, the problem is worse, within every community there are vendetta hostilities between the leading families of warlords. I strongly believe that there is no hope for peace in this country. Lucky are the ones who can leave, unfortunate are the ones who can't.