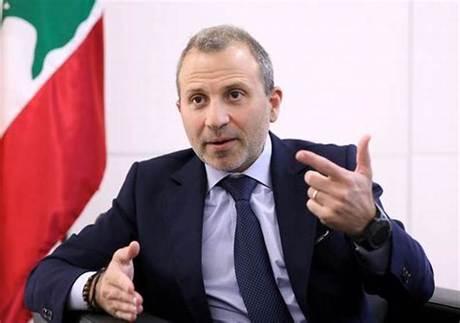 Free Patriotic Movement chief Jebran Bassil on Thursday lashed out anew at PM-designate Saad Hariri, blaming him for the delay in forming a new government.

“Today it became evident to the naked eye that PM-designate Saad Hariri is not ready to form the government for known external reasons, which we had refrained from mentioning previously in order to give extra chances,” Bassil said in a statement released by his press office.

“Based on the fallacies he mentioned in his statement, today it becomes clear to the waiting foreign powers and the burning interior that PM-designate Hariri has invented a new dilemma in the way of the government’s formation,” Bassil added.

Moreover, the FPM chief accused Hariri of “withholding” the cabinet formation process and “exploiting” it in his ongoing visits to foreign capitals.

Addressing the Lebanese people, Bassil added: “Your promised government is hijacked and it will only be possible to recover it through the approval of foreign powers or a revolution inside the country.”

LOL this loser is becoming more ridiculous and irrelevant by the day.

The Shia duo froze the parliament/government for months to prevent Hariri International Tribunal, not only killing our economy and 6% growth after Cedar Revolution, but also destroying downtown Beirut. The damage to our economy and position of Beirut was in the tens of billions. Then the Useful Idiot kept Lebanon for over a year without a presidents being played like a marionette by Hizbollah. That not only destroyed what was left of our economy but made sure we could never recover to our previous status in the region. Then this Don Quixote who should be rotting in prison is lecturing us after creating unpreparable damage to the Christian community and Bassil/Aoun/Hizb bringing hell to Lebanon. What a disgusting loser!

This guy was Lebanese foreign minister for six years today no one will meet him even if he offered to hand wash their car for free. In six years he was not even able to established any meaningful contact. Anyone he's ever met came away feeling only disgusts, disdain and contempt towards him, starting with the UEA's Minister of Foreign Affairs, to whom he attempted to pimp out poor Caroline Ziadeh, then Lebanon's Deputy Permanent Representative to the U.N.

I don't quite understand.
According to the Constitution of the Republic of Lebanon, the PM-elect has to consult with the President concerning the formation of a cabinet.
As per all information received this has happened on more than one occasion, so exactly why is Mr. Hariri not allowed the free hand to form the new cabinet?
Simple too many politicians are sticked their feet into this wanting a cabinet of corrupt politicians not the one of technocrats that Mr. Hariri wants.

How ironic of you to comment on this. Give me a good example of Israel's government process. Oh no, you haven't had a functional one for the past 4 years. The only difference, is your government receives free of charge billions of dollars cash and military aid annually to keep you floating.

On the other hand, the corrupt lebanese are stripped, sanctioned and cornered by the same countries that financially supports your entity.

he is disgusting in every way

They are all losers just like 60% of the population that elected them. On the other hand, Hariri new in advance that he does not have a free hand to pick and choose. Why would he accept to be nominated.
Every time he attempts to form a government, it take him months over months to form one to resign a year later. What about lessons learned.

If he is not up to the challenge, let another smart person do it.

This system need to be change. A formation time-line should not exceed 45 days, after 2 unsuccessful formation,i.e. 90 days a new election will be automatically triggered.
If the president blocks the formation for the second attempt, that is another 90 days and within a 6 months period. A new election will be triggered followed by a forced president resignation. The new parliament has 15 days to elect a new president. If forming a government fails. The prime minister, will be selected by the newly appointed president and will form the new government.