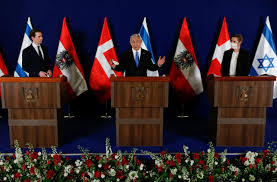 Leaders from Israel, Austria and Denmark announced Thursday in Jerusalem an alliance for the development and production of future generation coronavirus vaccines, a deal that has already sparked criticism in Europe.

"We don't know how long... (current coronavirus) vaccines will hold up," Netanyahu added.

"Is it half a year, is it a year, is it two years, is it more, is it less? We don't know. Therefore we have to protect our people against the reemergence of this pandemic, or mutations."

He did not specify the fund amount or the production capacity goal.

Frederiksen said the three countries "all have promising research that could pave the way for a next generation platform", adding they "would like also to explore possible cooperation on clinical trials".

Denmark and Austria are European Union members, and the Israeli partnership has elicited criticism from fellow EU state France, which said the European framework remained the best way to guarantee "solidarity" within the bloc.

Kurz had announced the alliance on Monday, saying the European Medicines Agency (EMA) was "too slow in approving vaccines", leaving the bloc vulnerable to supply bottlenecks at pharmaceutical companies.

But France defended the agency and insisted that "the most effective solution for meeting our vaccination needs must remain within a European framework."

"This is what guarantees the solidarity among member states that is more essential than ever," it said late Wednesday.

He added that "Israel is the first country in the world to show that it is possible to defeat the virus."

Israel, among the world leaders in Covid-19 vaccinations per capita, launched a massive inoculation drive in December, backed by a deal with U.S. pharmaceuticals giant Pfizer, which mounted an airlift of its vaccine developed with German firm BioNTech in exchange for data on its effects.

The Jewish state has so far administered at least one of two recommended doses to more than half its nine million-strong population, and led a series of large-scale trials that have so far confirmed the efficacy of the Pfizer/BioNTech vaccine.

The rapid rollout has allowed for shops to re-open and activities in public spaces to resume, some of which, such as sports centers, are reserved for people with a "green badge" indicating they've had two doses.

Netanyahu, who took his Danish and Austrian guests on a tour of a gym on Thursday, and has opened the door for other countries to also join the alliance.

French Foreign Minister Jean-Yves Le Drian has acknowledged "significant" shortcomings in the EU's vaccination policies, while criticizing what he called "attempts at secession".

Austria's neighbors the Czech Republic, Hungary and Slovakia have already bypassed the EMA to approve Russian and Chinese coronavirus vaccines.

The EU has seen a sharp shortfall in the first three months of this year of deliveries it had been counting on to kickstart its vaccine roll-out, with Anglo-Swedish company AstraZeneca facing fierce criticism from the European Commission for supplying just a fraction of the vaccine doses it had promised to deliver to the bloc.

The European Commission, however, refrained from censuring the Israel-Austria-Denmark alliance.

"We welcome the fact that member states are looking at all possible options to improve the common European response to the to the virus," said commission spokesman Eric Mamer.

"For us, there is no contradiction," he added.