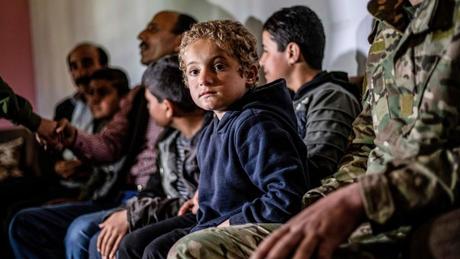 Syria's Kurds have handed back 12 children of alleged Islamic State members to their mothers from Iraq's Yazidi minority, a Kurdish official said Friday.

"The children, aged two to five, were all born to Yazidi mothers and fathered by IS members. They were handed over to their mothers" on Thursday, said Syrian Kurdish official Zeyneb Saroukhan.

Dozens of Yazidi women and girls survived sex slavery at the hands of IS jihadists in Syria and have since returned to Iraq, but many were forced to leave their children behind or risk being shunned by their community.

Saroukhan said this was the first time children had been given back to their mothers.

IS abducted thousands of Yazidi women and girls from their ancestral Iraqi home of Sinjar in 2014, then enslaved, raped, or married them off by force to jihadists, including in neighbouring Syria.

US-backed Syrian Kurdish fighters say they have rescued dozens during their years of battles against IS that led to their 2019 territorial defeat.

But while the Yazidi community welcomed those survivors back to northern Iraq, that compassion was not extended to their children.

Saroukhan said it had been the Syrian Kurdish authorities' duty to look after the children until their mothers asked for them.

Yazidi women and children have previously returned from Syria to Iraq, but many of those abducted remain missing.

In May last year, a then 17-year-old Yazidi girl abducted by IS returned to Iraq after the coronavirus lockdown in Syria delayed her homecoming.