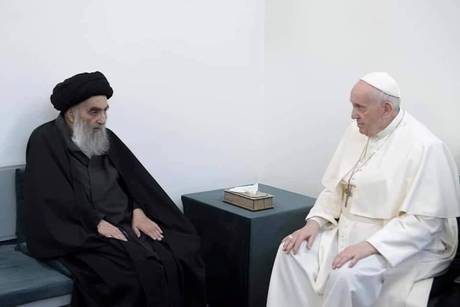 The Iraq meeting of Pope Francis and Grand Ayatollah Ali Sistani, one of Shiite Islam's top clerics, was front-page news in Iran Sunday, with some media declaring it a chance for peace in the neighboring country.

Officials in Iran, a Shiite-majority country like Iraq, have not yet commented on the pontiff's historic visit to Iraq that began on Friday.

Tehran, with its allies within Baghdad's state-sponsored Hashed al-Shaabi paramilitary force, helped Iraqi troops defeat the Sunni jihadist Islamic State (IS) group at the end of 2017.

Iran's reformist Sazandegi daily said the two religious leaders are now "the standard-bearers of world peace" and called their meetings "the most effective event (in the history of) dialogue between religions."

Another reformist daily, Shargh, said it was "a symbolic spectacle showing the importance of cooperation between followers of different religions."

"Victory for Shiism and Christianity," wrote the government-run Iran daily in a front-page column, saying that the pope's visit showed that "Christianity is alive in Iraq" despite the "suffering" caused by the IS.

Iran's conservative dailies noted that the return of security to Iraq was the result of efforts by "resistance" forces, recalling Sistani's call in 2014 for Iraqis to take up arms against the jihadists.

"Pope Francis and many western countries must be aware that this freedom (to travel to Iraq) owes much to the blood of the courageous youth of the resistance axis and the wisdom of the Shiite authority," said the ultraconservative Resalat.

It added that the meeting could be "a valuable opportunity for peace and to alleviate the suffering of the Iraqi people, especially the Christians affected by the Islamic State's invasion."

Another ultraconservative publication, Kayhan, said that "the security of Iraqi Christians" and Muslims was made possible through the "sacrifice" of "young Iraqis" commanded by Iran's General Qasem Soleimani and Hashed deputy Abu Mahdi al-Muhandis, who were killed in a U.S. drone strike in Baghdad in January 2020.